Home Celebrity Jamie Foxx Skipped Out on Avengers: Age of Ultron to Stop by... 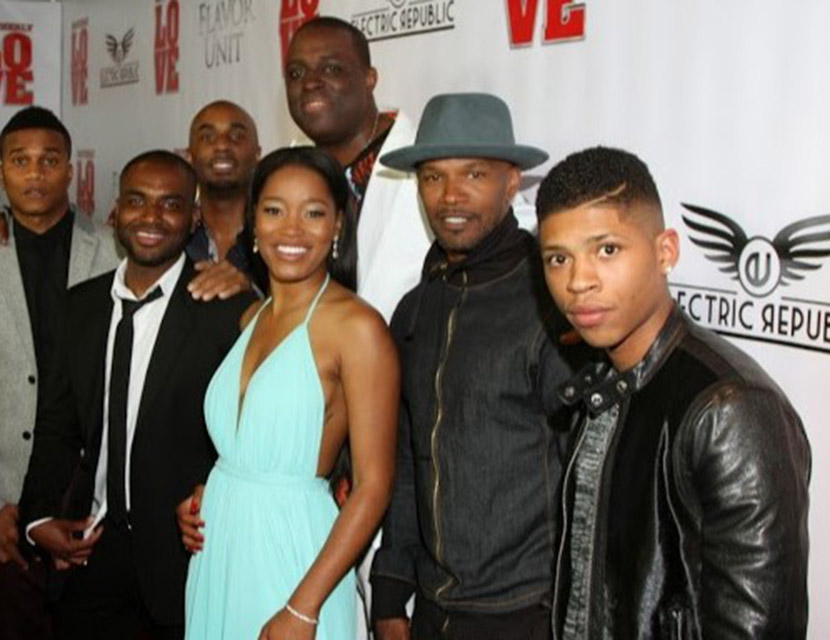 There were two premieres last night: the ginormous Marvel’s Avengers: Age of Ultron, which tied up Hollywood Boulevard again (the last prem around Hollywood and Highland was Furious 7), and then there was the somewhat smaller but as big in heart Brotherly Love at the Pacific Design Center. Jamie Foxx threw over pal Robert Downey Jr. and Marvel for the smaller affair and was joined by Tyrese Gibson, Meagan Good, Christina Milian, and Andy Garcia, among others. The film’s young cast all turned out, as did the film’s first-time writer/director Jamal Hill. The production company is Queen Latifah and Shakim Compere’s Flavor Unit Entertainment.

Sean “Diddy” Combs popped onstage to say a few words (his son, Quincy Brown, is one of the movie’s leads). “The only problem I had with the movie is the lead character,” he joked. “I thought I would have been a great fit.” There will definitely be some breakout stars in this film—Brown shows promise, Cory Hardrict was electrifying, and the audience couldn’t help but root for both Eric D. Hill and KeKe Palmer.

Palmer—who we’ve watched onscreen since she was nine (“I’m going to teeeell my Auntie!”)—said a few words before the lights went down. “Brotherly Love was definitely a movie of the heart…I remember I wrote a long letter, I said ‘I’ve got to be a part of this—what can I do?’ A month later I’m in the film. It’s magic,” Palmer gushed. Macy Gray also shows some of her acting chops in this film—she’s heartbreaking.

After the shocking ending (I won’t spoil a thing, but check it out), everyone hit the escalators in the Blue Whale for a party that Diddy threw on the third floor. The booze was flowing, the bass was pumping, and the bite-sized chicken and waffles were a fine idea. Brotherly Love opens April 24.

Carol Burnett Longs for Cleverness Backstage at the SAG Awards