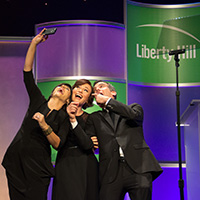 The International Ballroom at the Beverly Hilton has seen a lot of speechifying. In this last movie award season alone Matthew McConaughey said a collective six “All Rights” on the Hilton’s stage. Last night’s speeches at Liberty Hill’s Upton Sinclair Award dinner scored BIG on the meaningfulness-o-meter. Serious do-gooders got up in front of a packed (I mean a lot people—wall to wall humans) room to encourage folks to ante up money to the “Change. Not Charity” social justice org. The room was a-buzz with enough energy to power the city, starting with sparkplug CEO/Prez Shane Murphy Goldsmith who can speak above any din. Goldsmith already wins the award for loudest podium voice of the year (and it’s only April). Here’s what else I picked up…

Mayor Eric Garcetti is Cool
Okay, we knew this already, but he got up to speechify (I think sans teleprompter) saying, “Know that your Mayor isn’t just giving a speech. I am giving my private dollars,” he said of Liberty Hill. When the org’s leaders wanted a selfie with him he joked, “That’s so 2013, but whatever.”

Celebrities Aren’t Necessarily Famous
The do-gooders that received awards should also receive a Lifetime Achievement trophy, as they put in time and money and get others to do the same. Awardee Kafi D. Blumenfield (who serves on the Los Angeles Recreation and Parks Commission among many others) said it best: “Philanthropy is really about a love of humanity.” Awardee Veronica Gutierrez has literally been giving the clothes off her back to the less fortunate (well, her mother did) since she was a kid. Hangover producer/awardee Scott Budnick brought some  of the young people he has helped through his Anti-Recidivism Coalition over the years onstage. Producers Albert Berger and Ron Yerxa (Election, Little Miss Sunshine, Nebraska) have been with the org for 25 years. “I’m hoping I have another 25 in me,” Yerxa said.

Flea Wears Suit—Alert The Media—Done
The Red Hot Chili Peppers bassist threw on a suit to give the award to Berger and Yerxa, who he worked with in the film Lowdown. “I was blown away by them,” he marveled. “They had no regard for commerce whatsoever.” In this crowd, that was a compliment.