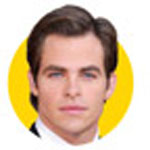 Chris Evans
His signature smirk and Captain America tights can be spotted in two Marvel franchises.

Chris Hemsworth
Another Marvel hero (Thor). His role in Ron Howard’s Rush may help him stand out.

Liam Hemsworth
What a gene pool! Chris’s younger bro stars in the second installment of The Hunger Games, out in November.

Chris Pine
Captain Kirk has set his phaser to stun as the CIA’s next Jack Ryan.