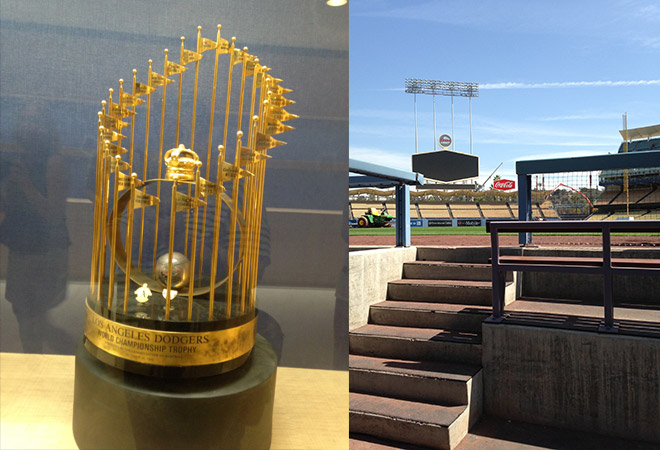 World Series Trophy and the view from the Dodgers Dugout

Sooner or later I will peek inside every manse in town while covering parties for The SEEN. I’ve made it my personal mission to wander into every home in Malibu Colony (getting there!) and I’m starting to repeat myself in Bel Air, Bev Hills and the Hollywood Hills. But I went with some Dodger Superfans on a behind-the-scenes walking tour of Dodger Stadium the other day, and it is only appropriate to mention their stadium tours on opening week of the season.

I am not a Superfan and don’t bleed blue, but even I thought going down to the field was pretty cool (one eight-year-old kid on the tour said in a hushed tone looking out at the electric green grass, “This is sacred ground”). Tours start on the Top Deck level (terrific view of Downtown) and include everything you did and didn’t know about the Dodgers from knowledgeable guides. The Monday I went there were about 30+ folks who they split into two groups.

My fave part? The Lexus Dugout Club. It’s where notables like Jay-Z, Will Ferrell and Jack hang out and have a drink behind home plate. And you can see why after checking out the museum-like items on display (the home plate from Ebbets field, World Series trophies, etc) and the bar that it is definitely the way to watch a home game. One thing on the tour that won’t be there for long is a look inside the Visiting Team’s Clubhouse. It is original from the ’60s and is on the list for demo. As for the Dodgers, you only get to the door of their Clubhouse.

You do get onto the field (NOT the grass) and you can go inside the Dodger’s Dugout (okay, when are you ever going to do that again?). Also, as a journalist, checking out Vin Scully’s press box and seeing the field from the veteran play-by-play announcer’s perspective made me smile.

So this party house is worth a looksee—either buying a tix to a game (the season opened on Sunday) or a tix for a tour (which they give three times a day – except on early home game days or holidays).