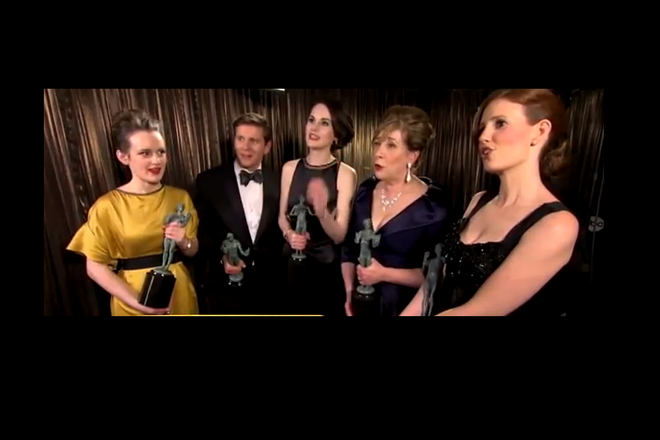 “That was my favorite red carpet ever!” Jeff Daniels exclaimed as he stepped off the long Screen Actors Guild Awards carpet. Perhaps he was channeling his cranky Newsroom character Will McAvoy before he headed into the Shrine. His fellow actors then proceeded to grab a mic and talk about how they got into acting and then when they won, get onstage and nervously say what the non-anatomically correct statue missing a mouth means to them. Backstage at the Shrine is also where more fun takes place and the after party is great fun. Here are some tidbits:

“It’s all downhill from here,” Bryan Cranston said. “Walter White is the role of my career.” He held his award under its armpits. “I posed for this a while back,” he said looking at the statue. He popped in after the Argo cast stopped by following their win. It was really funny to watch the fellas gripping the award. Underarms and under knees for John Goodman, Alan Arkin.

Jennifer Lawrence and Jennifer Garner got chatting away backstage. She could barely make it into the pressroom they were gabbing so much. Hurrah to the Shrine. It usually smells VERY interesting in the old auditorium; someone gave it a scrub up.

Jennifer Lawrence hadn’t been feeling great the last few weeks and said, “I am feeling so much better. I am on a lot of medication and I got a really cool inhaler.”

After all these years I finally noticed the small green tattoo on Daniel Day Lewis’s left hand when I got up close and personal. He hoped his portrayal of Lincoln made the dead prez smile, “If I made him laugh a couple of times, I think he’d be happy enough with that.”

Ben Affleck accidentally missing a journalist in the press room with a question: “Sorry to have overlooked you. I know how it feels.”

Tina Fey on what she hopes will happen with 30 Rock: “I hope it has a long life in syndication and another generation of nerds discover it.”

Everyone had dresses that didn’t quite fit: Tina Fey (she swore hers was comfy but kept adjusting it) saying: “After the Globes I wanted to be comfortable and this dress is comfortable,” Julianne Moore couldn’t even stand up straight in hers.

AND my new fave expression of surprise came from Phyllis Logan of Downton Abbey when they won for best ensemble: “Shut the French windows.”

Then on to People mag’s/EIF’s after bash which is fantastic as the lights are low, everyone shows up and they smoke, drink and eat (thanks Wolfgang Puck – kobe meatloaf with brown sugar ketchup was a FINE idea).

Smoking corner: Mad Men cast on one side and Downton Abbey on the other. The Downton cast could also win an award for palest cast—alabaster ladies and gents. There was a celeb line for the goody bag, no one is above grabbing their own loot. As Modern Family’s Jesse Tyler Ferguson noted lugging the heavy bag, “It’s a lot of hairspray and gel.”

The SAG Awards Nominations Right Some of Yesterday’s Wrongs