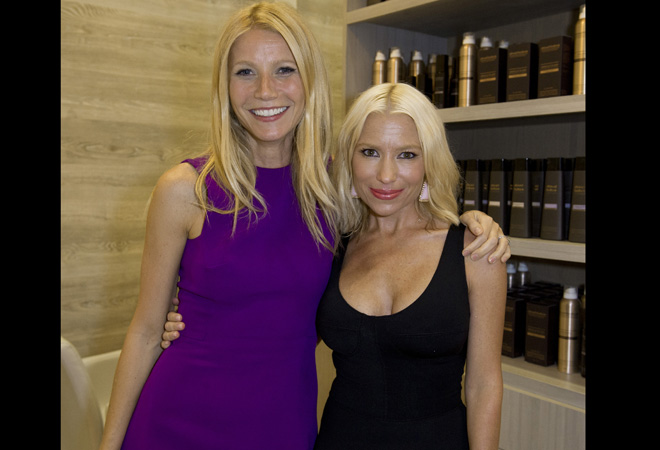 I parked my ride next to a bulldozer with a bucket full of dirt last night before heading into the not-yet-finished Tracy Anderson flagship studio. The first person I ran into outside was Molly Sims. There were more blondes to come. The immaculate fitness space smells like fancy wood and Samantha Ronson was spinning in front of a rack of white spa towels. And here comes a smile…was that…could it be? Yes. There was Mindy Cohn. Smiling in the middle of the throng. Natalie from Facts Of Life. She nodded, I nodded. We were both the only ladies of a certain size in the room.

There were a couple of children running around on the polished floors (which waiters bent down to wipe when anyone dropped a canape). A closer look at the cherubs—it was Apple and Moses—Gwyneth Paltrow and Chris Martin’s children, who were playing with a third kid. There were Tracy Anderson eats (she has her own Food Program) which made their way out a back door. My fave—a butternut squash cube with a syringe sticking out of it. You squeezed the bulb and infused your tidbit with lavender maple syrup before popping it in your mouth. God Bless America. As I went down the steps there was Paltrow in a short purple Victoria Beckham number. The Michael Kors folks sent me a note today that she was sporting Kors shoes. Good to know. Husband Coldplay’s Chris Martin stopped by for a spell in the darkest ensemble of those gathered. I walked back to my car, which was getting its first parking ticket (new car) and called it a night.