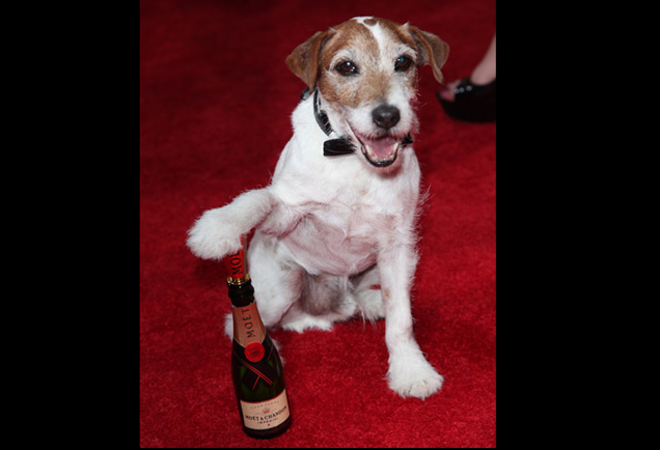 One year I showed up waaaaay to early for the Golden Globes. I had so much time to kill, I was able to have dinner with the waiters in the garage and then watch as the bomb squad swept the room with trained dogs before the tables filled with TV and movie folk. This morning I had another glimpse of all that goes into making sure “the third most watched awards show” isn’t … um … a bomb.

Around 9:30 a.m. a hearty group of party journalists (ahem, it means we work a lot at night) filled the Hilton’s kitchen as Executive Chef Suki Sugiura went through every morsel that will grace Jodie Foster’s plate from a yummy Cali pepper honey goat cheese on endive pear salad to souped up surf and turf—smoked flat iron steak and Cali olive-orange marinated Pacific sea bass with caramelized mint fennel. Dessert is an elaborate cappuccino mousse cake which, to me, resembles a boob, right down to a pink chocolate nipple on top until Executive Pastry Chef Thomas Henzi put some delicate chocolate over it. They never really show the food on TV, otherwise you’d just see tables full of breasts. Well… I hope the celebs appreciate dinner. I can’t count the number of times I sit behind skinny actors (ahem, Halle Berry) and they never touch the grub.

MARK’S GARDEN is doing the centerpieces in various shades of red with mostly roses with names like black beauties and forever young.

Moet & Chandon is providing the bubbly again. Those are the wee bottles you see on the red carpet complete with gold funnel to make it go down your gullet faster.

My fave star of the Globes, though, is the Beverly Hilton. My home away from home. It has hosted the Golden Globes for the last 38 years (42 times total – it’s math). Sometimes I miss the late Merv Griffin’s ugly flower covered carpet that used to be in the ballroom or the payphone that was in the ladies room, next to the stalls, which columnists back in the day used for scoops. There are back entrances through kitchens for shy stars and many ways around prying eyes and I will always mourn Trader Vics. Ah memories. Here’s to creating some new ones.