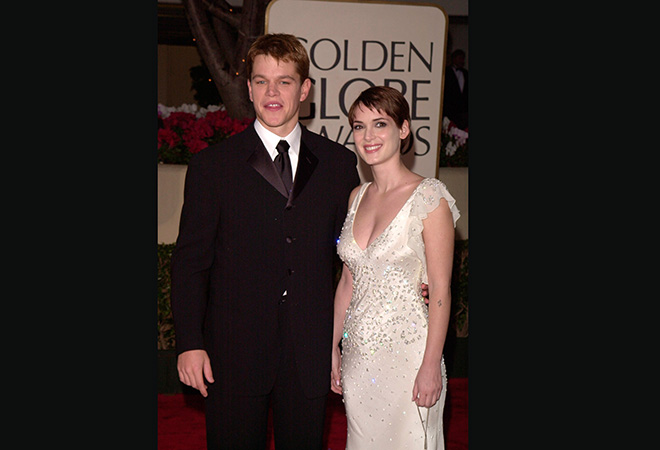 Memories: Matt Damon and Winona Ryder at the Golden Globes in 2000

The Golden Globes are Sunday. I’ve covered this trophy-filled party at the Beverly Hilton for more than a decade. It’s the only show where the drinking actually begins on the red carpet with Moet & Chandon in wee bottles —gold funnels attached—all the better to go down your gullet faster.

Back in 1998 Matt Damon and Ben Affleck were up-and-comers who had just won their first (and in Damon’s case, only) Golden Globe for Best Screenplay for Good Will Hunting. Damon could not stop smiling or chatting. It was the usual banal awards stuff, but to this day I remember it clearly and fondly (sort of like the time I called Ben Stiller a schlub). Damon and Affleck were arm in arm and absolutely giddy at the ceremony. Another reporter and I simply told Damon he looked sharp and he replied, in an astounded manner, “Ben and I begged for free suits and we got them!” In the years since Damon has been nominated four more times but has only won a Golden Globe once—in 1998. In 2000 he showed up at the award show with then gal-pal Winona Ryder. His Behind The Candelabra co-star Michael Douglas will probably scoop up the faux gold/marble statue in their category this year, but I’d be happy to see things go another way. When I see Damon at the Globes, I always see a guy, excited beyond belief, that one Sunday in 1998 he rated a free Calvin Klein suit.