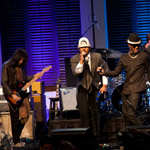 I walked into the Beverly Hilton’s Ballroom for Autism Speaks’ 2nd annual Blue Tie Blue Jean Ball with trepidation. Jeans? Really? I’ve walked through the same doors at least once a week for 15 years and never once could I wear denim and my sneakers. Thank you for your good work Autism Speaks, and thank you, thank you, thank you for allowing me to let my hair down at your casual affair.  Are ya listening, Golden Globes?

There was a lovely buffet (no stuffed chicken), sorority girls running around selling raffle tickets, and some great performances. Actresses Sarah Shahi (she starred in Fairly Legal and Chicago Fire and is married to one of my faves, Steve Howey of Shameless) and Beth Riesgraf (Leverage) hosted. Krysten Ritter (Don’t Trust the B—- in Apartment 23) was a no-show. She tweeted me that night that she was “so devastated to have missed this event. I have horrible food poisoning.” Seems legit. Comedian-actor Kirk Fox filled in and he was a riot. There was also a terrific animated short by Matt Manning (Robot Chicken) called “My Name Is David,” in which a kid with autism explains his condition in a way that was easy to understand.

It was a nice, casual fundraiser—ran a bit long during the auction as it was hard to get folks to pony up. Cheers to the Guess? Foundation, the big honoree of the night. Tha Boogie performed (great) and so did Nikki Reed and hubby Paul McDonald (American Idol). I wasn’t blown away by their soft folk, but they were sweet. Raphael Saadiq and his band proved worth the wait. He and his band put on a great show.