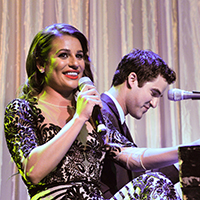 “Before Glee, I used to play in a lot of bars and restaurants,” Darren Criss said behind the piano at the Beverly Wilshire for Taste for a Cure. “I would play certain songs so people wouldn’t get up to leave, which is exactly what I am doing to you now.” There were a few valet-dashers, but Criss was so terrific that most butts stayed firmly in seats, especially when he brought fellow Glee-er Lea Michele onstage with him to sing “Over The Rainbow.” He actually auctioned her off (a song and a pic with a fan) and got $5,000 from the gala’s co-chair Dana Walden. It was very sweet, and a surprised Michele fumbled over the tune’s words and pitch a bit. “Don’t ever make me do that ever again!” she said, hitting his arm. All for a good cause.

The Jonsson Cancer Center Foundation ‘do turned the hotel into a culinary tour of France with bites from Burgundy, Rhone/Provence, Loire Valley and Bordeaux. The Chicken a La Bresse with sautéed morels and white grape was my fave. Another nice touch? Charcuterie/cheese plates at each setting with delectable tidbits on them. I sat by one of the doctors/researchers at the Jonsson Cancer Center, and it was truly fascinating listening to what he was working on. Sony Pictures Television Prez Steve Mosko was the gent of the hour, giving a heartfelt speech about the “face of cancer” and genuinely hoping that the dinner wasn’t around for much longer (that a cure would be found instead). This was after, um, pal? Joel McHale roasted him, saying, “This must be a big night for you Steve. Just as big as calf day at the gym.”