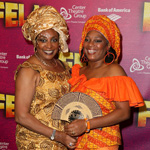 It was a riot watching the crowd streaming in to the Ahmanson for FELA! Grey-haired ladies with their ‘do’s just so next to bandana-wearing fellas in army fatigues. People with impressively coifed mohawks sitting down next to trophy wives full of fillers with boobs bumping their chins. My feet started tapping immediately; the music is fantastic and so is lead Adesola Osakalumi. He transforms the theatre into Kuti’s club—The Shrine and literally demands that the audience get on their feet.

At one point Osakalumi is onstage simulating smoking drugs and talking to the audience when someone from the audience hollered “Pass it!” Which got Osakalumi/Kuti off on a “puff, puff, pass” tangent. Part of the show? Who knows. At another point he asks the audience if they have been arrested. I so want to know what the couple (Hollywood math: take the fella’s age, cut it in half and subtract six = wife’s age) in front of me were arrested for (they both raised their hands proudly in response). It boggles the mind. I could have done without an intermission (but I wasn’t dancing and singing my heart out the whole time), but the costumes (Tony-Award winning), choreography (Tony-Award winning) and acting were great. Who did I spy in the audience on opening night? The real Kuti’s oldest daughter Yeni, Councilwoman Jan Perry, Producer Lawrence Bender, actor Barry Shabaka Henley and Push Girl Auti Angel. Check out the pics above.