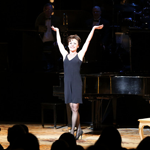 I’m exhausted and all I did was sit and watch Tracie Bennett’s powerhouse performance as Judy Garland in End of the Rainbow (by Peter Quilter, directed by Terry Johnson). I couldn’t take my eyes off of Bennett who portrayed Garland in the last year of her life, Erik Heger, who plays Garland’s last husband, Mickey Deans, he reminded me of Will Ferrell/Ron Burgundy – it was the hair. Notables like Betty White (who stopped for dinner before the show underneath the Music Center at Kendalls), Jesse Tyler Ferguson, Lainie Kazan, Alicia Witt and Darren Star seemed mesmerized as well. Some 2,000 people gave Bennett and her costars a hearty standing O before the cast headed out to a post-show bash at Perch. I ran into some folks from the production in the parking garage and all carried Tiffany boxes (opening night gifts). Producers S.D. Wagner, Joey Parnes, John Johnson and Lee Dean gave Bennett a pair of ruby red Christian Louboutins.

Folks in the seats around me raved, but there are some Judy fans who aren’t happy about the play. Judy Garland tribute artist Peter Mac doesn’t approve of the portrayal and thinks Deans is “canonized” in the show—which I don’t get at all. He writes about it for HuffPost.

End of the Rainbow continues through April 21st at the Ahmanson. If Bennett can keep up the same intensity as opening night, it will be a terrific run.