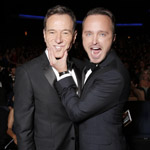 Great fun last night backstage at the Primetime Emmy Awards. The Governors Ball went late into the night. Check it out…

Merritt Wever (Nurse Jackie) came backstage after her six word acceptance speech (“Thank you…I gotta go, bye.”). She started to lose the ability to speak again and explained, “It’s hard to do those, sorry, I’m scared. I was scared because it was unexpected…I have therapy next week.”

Jim Parsons is always a fun interview. He’s won the Emmy three times playing Sheldon on The Big Bang Theory. He hit the Governors Ball and that’s about it. That was his forecast, “I’m not much for after-parties. I like to read in bed.”

There was a gasp in the press room when Jeff Daniels won for The Newsroom. Classy touch getting up on stage while chewing gum. (At least he spit it out before hitting the backstage press line). That night he said he was hopping on a plane to Atlanta to start shooting Dumb and Dumber II. I thought it was a goof, but it’s legit: Daniels said, “There are some things in Dumb and Dumber II that make the toilet scene [from the first movie] seem tame.” Charming.

Bobby Cannavale (Boardwalk Empire) said everything went into slow-mo when they called his name. “It took me awhile to get up. I was thinking about my girlfriend and went ‘Baaaaaaaabbbbbbyyyyy.’” Gal-pal is Rose Byrne.

And you know you don’t work with doctors when someone jumps to the front of the pressroom and asks, “Anyone seen a cumberbund?”

Michael Douglas continued to speak about his son Cameron backstage (and call out the federal prison system), “My son is in federal prison. He’s been a drug addict for a large part of his life…. Right now I’ve been told that I can’t see him for two years. It’s been over a year now. I’m questioning the system.” On a happier note he mentioned that playing Liberace kind of gave him a “freedom of spirit” and a “new appreciation of life.” Never a dull interview that guy.

Bryan Cranston has given his Halloween blessing for the Walter White/ Heisenberg costumes saying, “It tickles me to see those costumes.” Once again, our Style Editor, Linda Immediato was ahead of the curve last year, as this year it is likely to be the most popular costume.

I walked over to the Governors Ball with a happy Tony Hale (he won for VEEP as did Julia Louis Dreyfus), who was practically skipping. We said the magic word at a metal wall (truly; we uttered “Emmy” and it opened), and then it was through the cattle gates and past some velvet ropes before entering the cavernous hall where there were dancer’s everywhere for the enchanted forest themed ball. An engraving station in the back was set up to put your name on your Emmy. Derek Hough took his Outstanding Choreography award and danced his way back to the engraving station, and then he took a Trophie (my new word for taking a picture of your award) of his Emmy as it was being engraved. Hough is aGame of Thrones fan saying, “I’m a bit of an addict right now. I was sitting next to Khaleesi.” He drew out the last word very dramatically.

The cool kid section of the party was around the 300—600 table section (I was in the 170’s natch). Breaking Bad folks, HBO, Showtime, etc. Dinner was fantastic (how does Chef Joachim Splichal serve almost 4,000 people – crazy). And this ain’t the Oscars. At a certain point in the evening, Claire Danes was leaning against Mandy Patinkin (tired) and ladies were walking around the enormous party carrying their heels.

On my way to the car I noticed they were giving the winners an Emmy cozy for their statue. (the guy handing them out called ‘em Emmy coffins – that works too). It was an Emmy sized box with the foam cut out in the elaborate shape of the trophy (a winged angel holding a globe). I walked into the night with Louis C.K., who had a cigarette dangling in his lips in search of a light.