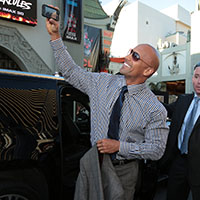 Check out photog Alex Berliner’s pics from the premiere of Paramount Pictures and MGM’s Hercules (the movie opens today). The demigod himself—Dwayne Johnson—hit the red carpet with gal-pal Lauren Hashian while Eddie Murphy strolled into the film arm in arm with his girlfriend, model Paige Butcher. Unfortunately, it’s unclear if Murphy chanted “Hercules, Hercules, Hercules” at any time during the movie or party. Why did the actor make an appearance? Probably because Paramount finally announced a release date for Beverly Hills Cop 4 (March 25th, 2016), which he’ll of course star in. Hercules‘ director, Brett Ratner, was there and so was Mariah Carey (Ratner directed some of her music videos), Rufus Sewell, Sugar Ray Leonard, and Ian McShane. After the screening, guests partied poolside at the Roosevelt Hotel across the street from the TCL Chinese Theatre.