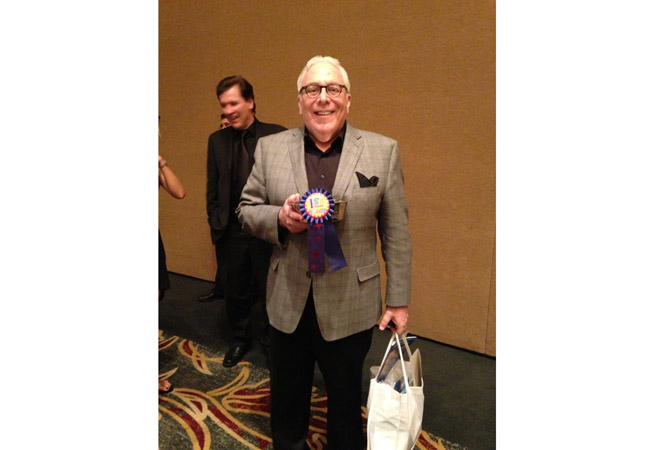 “I thought we were going to judge doggy-style?” joked Jim Piddock as he and Fred Willard took their seats to judge a Best in Show style celeb competition at the Actors and Others for Animals benefit Saturday at the UniHilton (I’m trying it out – no? Okay, the Universal Hilton). JoAnne Worley is the Prez of the organization, and Loretta Swit the Vice Prez, and they were joined for a rather sweet luncheon by Tippi Hedren, Ed Begley Jr., Leonard Maltin, Susan Sullivan, Jay Johnson and Bernie Shine. TV legends Earl Holliman and Wink Martindale also stopped by. Martindale almost took a header at the silent auction, but managed to stay upright. Side note: there is no one with better leisure wear at any function I’ve ever been to than former game show host Wink Martindale. He’s my best pick.

Whose pet took home the honors for Best in Show? Vintage collector/gallery-owner Bernie Shine, whose pet video (contestants brought in 2 minute snippets – appropriate considering how many times I was hit up to give money for spaying and neutering programs) won. Shine’s vid showed his shar pei pal flossing, brushing her teeth and washing her face (see for yourself). “I have very good hygiene,” Shine said before noting that the dog was constantly watching him conduct his routine. “Do you think they use the same toothbrush?” Piddock asked while watching the video side-by-side with Willard. “Because that would be a little creepy.” At the end of the veggie luncheon (natch), attendees took home chocolate puppy and kitty centerpieces.