Home Uncategorized Dinner and a Show: Acrobats, Fashion and Music at a Birthday Party... 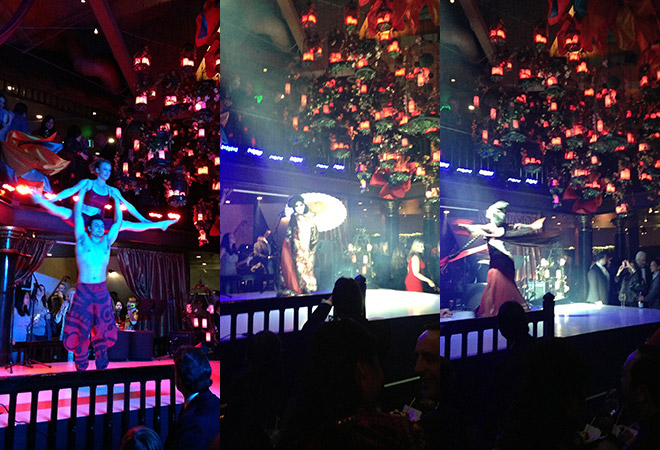 Eating, along with watching acrobats, are two of my favorite things. Crustacean and The Beverly Hills Chamber of Commerce let me combine my loves the other night as the Chamber and Master Chef Helene An celebrated Beverly Hills’ 100th birthday.

I should not be surprised; I’ve gone to many over-the-top parties at the Bev Hills restaurant over the years. There have been elaborate costume affairs, Oscar bashes, a surprise birthday party for Jim Brown, and now this latest extravaganza. The best part of this party? Entertainment abounded from the moment one entered and set foot onto the transparent floor—where koi fish swim from one end to the other—until the moment of departure.

Hats off to the performers emceed by Tommy Davidson, who made sure there was never a lull on the stage set up in the middle of the restaurant. There were acrobats dangling from above, singers on the upper level and lower levels of the joint (opera singer Carlos De Antonis really got the place going), and rocker/cellist Tina Guo sizzled as did American Idol-er Jessica Sanchez. They topped it off with an otherworldly fashion show. More, more, more. Thumbs up from the Seen Queen!