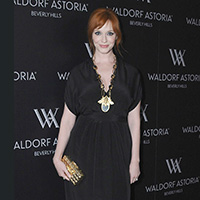 Last night Mad Men’s Christina Hendricks and a lot of chipper men and women in dark suits gathered around the pool at the Beverly Hilton to hear the official launch announcement of the Waldorf Astoria. I caught myself excitedly taking snaps of the model of the art deco building and will break ground next door to the Hilton (the design even complements it) in a few months and is slated to open in 2017. Beverly Hilton and Waldorf Astoria Beverly Hills owner Beny Alagem walked on water (a podium was set up in the middle of the pool) to officially announce the launch, “The design was almost a decade in the making,” he said. “It is going to be the most luxurious urban resort in the country.” Alagem also announced that there will be a Graff Diamonds boutique in the lobby, the rooms will be some of the largest in the city, and he’s working on a celeb chef.

I also stopped to chat with Hendricks (when she wasn’t surrounded by fellas), “I’m such a fan of the New York hotel,” she said. “I have sort of a fetish for old historic places and I know this is going to be a new one, but to me it’s iconic. I’m excited because they are going to sort of go back to the original deco architecture, to me that’s old Hollywood. I’m a sucker for that kinda thing, I love it. I just like sitting in those rooms.” And as the new season of Mad Men starts on Sunday I asked for some scoop, “You heard it from me first, everyone’s going to die. Everyone’s gone,” she deadpanned. “I don’t know, actually. I have no idea what happens. I don’t know beyond the script. But I did get to see this Sunday’s episode and it’s pretty amazing. I was really energized by it. I saw it and got excited all over again.” The ‘do ran well into the night as no one really wanted to leave. It capped off with Natalie Cole singing “Unforgettable” with a projection of her father on the side of the hotel. Gotta love Bev Hills.