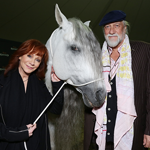 Last night the horses of Cavalia’s Odysseo trotted into their new home in Burbank for the next month, an enormous big top sandwiched between freeways. Ok. It’s across from Hooters. Parking is a nightmare, but the show is a dream. It’s Cirque du Soleil, Game of Thrones and The Lion King … on horseback. Opening night brought out some celebs (and their offspring) as well. Who did I spy starring at the beautiful horses, super happy acrobats and amazing sets? Reba McEntire, Noah Wylie, Laura Dern, Mary Steenbergen, Jillian Michaels, Mario Lopez, and Diane Lane among others.

The show is magic and even tops their last go-round in L.A. They’ve upped the ante and now there is so much going on you hardly know where to look. Acrobats dance and do amazing feats next to the horses (and while they are riding them) and the carousel that comes down from the ceiling doesn’t even seem out of place in the desert (which fills up with water, by the way) they’ve thought up. Check it out, it’s worth your time and $.