Home Awards Watch Bono, Sandra Bullock and Tom Hanks Went To The Desert For Some... 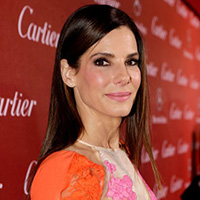 “The Palm Springs Film Festival. This means the holidays have come to an end and for a few lucky people the celebrity mule train has begun,” Tom Hanks joked while accepting his Chairman’s Award from pal Julia Roberts in front of the 2,000 plus people who had gathered in the Palm Springs Convention Center. Roberts accepted an award herself earlier in the evening.

The Palm Springs International Film Festival is the first stop on the A-list movie award circuit and it highlights the major players you’ll be seeing on red carpets over the next few months. Here’s what biggies like Meryl Streep, Sandra Bullock, Bono, and Matthew McConaughey had to say at the Cartier-sponsored gala in the desert:

There Is Crying Involved: Not one but two celebs shed tears at the event this year. Breakthrough Performance Award Winner Lupita Nyong’o was the first to get choked up. “I think I am going to need tear duct surgery to stop crying so much,” she said. The second honoree to turn on the waterworks? Sandra Bullock. The actress got talking about the films she has been seeing. “I was also watching heartbreaking stories about our past… they will one day help me show my son how far we’ve come.” I lost my bet that Meryl Streep would end up with wet eyes too, but she shed nary a tear.

Bono-nanza: The late Sonny Bono started this festival, but it was another Bono (U2’s frontman, as if I need to mention this) who showed up (along with bandmate the Edge) to take home an award. Sonny Bono’s widow Mary Bono provided an (ahem) lengthy preamble before Idris Elba and Naomie Harris presented the Sonny Bono Visionary Award to the band for their song “Ordinary Love” from the film Mandela: Long Walk To Freedom. The fellas came onstage to say a few words (or as the Edge put it, “Probably more than a few words.”) Bono gave an inspired speech, saying, “Nowhere do people live off their imaginations more than in California.”

Everything Is Going To Be All Right: The partygoers at my table took a drink as Matthew McConaughey began speechifying with his signature, “All right, all right, all right…” He added a nice partin’ shot, thanking his wife for tolerating him while shooting Dallas Buyer’s Club: “I wasn’t that easy to live with at the time, but you never let me know that.”

Never Enough Hardware: Lovely Meryl Streep got up to accept the evening’s last trophy, the Icon Award, and as she pulled at the neck of her dress she said, “I don’t feel like an icon. Most days I feel like an I Can’t.” Carrie Fisher—did you help out with some speechwriting? Fisher has aided the actress with speeches in the past, but the “Icon / I Can’t” may have been all Streep’s. It was great fun.

The gala was gorgeous (18,500 roses were involved) and other luminaries (some receiving awards and others handing them out) included: Colin Farrell, Ewan McGregor, Thomas Newman, Idris Elba, Naomie Harris, Jane Fonda, Alfre Woodard, Amy Adams, Bradley Cooper. Post show, revelers migrated to the Parker Palm Springs for the annual party after the party.

The Academy Museum’s Second Anniversary Gala Brings Out the Stars