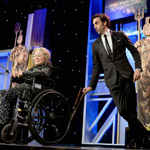 You learn a lot about celebrities when someone pushes an old woman in a wheelchair at them during an awards show. When Sacha Baron Cohen pulled a goof, “accidentally” tripping and pushing what appeared to be an elderly actress who had worked with Chaplin (“Grace Cullington” – really a stunt woman) into the crowd at BAFTA LA’s Britannia Awards, the only celeb who got up and tried to help was Iranian actress Shohreh Aghdashloo (there presenting another award to Sir Ben Kingsley). So Brava Shohreh, you were the only one legitimately distraught at the fact that Cohen seemingly killed a woman then continued accepting an award. Here’s what else I learned amongst the Brits:

Everyone Likes Benedict Cumberbatch: All who got up to speak about the actor were already smiling by the time they finished saying his name. From Gary Oldman (laughing via video): “Can an actor’s name be longer than ‘Tinker, Tailor, Soldier, Spy?’” to Judd Apatow, “My wife has a crush on him, which is weird because he looks nothing like me.” Cumberbatch summed up the evening like so, “I was told this was a friendly evening.”

Sean Penn Is Only The Ambassador To Haiti: All other countries are fair game to make fun of. He gave an award to Idris Elba saying, “He is a strange dichotomy. Manly and English. Nelson Mandela’s daughter Zindzi also got up to speak about Elba who portrayed her father in a biopic.

Katherine Bigelow Can Get Ralph Fiennes To Whoop!: After he called her “hot” he offered an award to the director saying, “Would you give her a really big whoop!” Which is apparently what she says when she gets a good take.

Don’t Have George Clooney Around During Dinner: The actor accepted an award from pal Julia Roberts who kept the jokes coming, “I’m here because Brad Pitt is out of town and Matt Damon is in town but unavailable,” Roberts sighed. Clooney got talking about one of his previous jobs selling shoes. I really didn’t need to know about the “corn stretcher.” I could have gone my whole life and not known about that. Thanks for the image, George.

After the awards, the Brits know how to do it. The bar was open again for an after-party. Bowler hats (a few) and booze. On my way out I ran into a girl with a purple beehive waiting behind security for Cumberbatch with a pretty good pencil drawing she’d done of the actor. I hope she got him to sign it.