Home Uncategorized Backstage At The Oscars 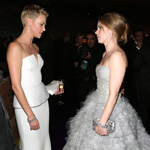 About midnight I did the walk of shame away from the Dolby Theater after Oscar (and awards season) were done with me. Workers were already starting to roll up the red carpet and get Hollywood Blvd. open again and coffee was being served to tired partiers waiting for their rides. Earlier, Ben Affleck was by far the belle of the Governors Ball after his Best Picture win and you couldn’t get near him. I caught an unguarded moment when he and wife Jennifer Garner had a long smooch in the dark room before he went to get his name engraved on his prize. It’s one of my favorite parts of the Academy’s big party, the engraving station that is next to an elaborate dessert set up. The smell of chocolate and gold (well, whatever those trophies are made of) a perfect combo. Here’s what else was shakin’:

A Sure Thing: What tipped George Clooney off that Argo was going to win? “The tipping point? Michelle Obama,” he joked when he saw the First Lady was presenting Best Picture via satellite. “He actually did have to look at the envelope,” he added about Affleck, who couldn’t believe he won. Backstage, a journo tried to solicit the fellas to attend a Foreign Service function happening in March. Clooney and fellow producer Grant Heslov threw Affleck under the bus, “Grant and I will be in Berlin shooting but maybe Ben could come.”

I’ll Have What She’s Having: For a young chick nobody works a pressroom like Jennifer Lawrence. She gets the biggest yucks by far and is quick on her feet (despite falling on her way up to accept her award). When she popped back into the room after her win she stood there petrified looking at us journos with our numbers held high (you hold them up to ask a question). “This isn’t an auction is it? You guys aren’t going to take it away are you?” She rambled a bit before confessing, “I’m sorry. I did a shot….” What did she think when she took a header going up to the stage in her big dress? “A bad word that I can’t say that started with f.”

Doesn’t Break Character Until The DVD Extras: Daniel Day Lewis had a lot of fun with people’s perceptions of how he works this year. He capped it off last night saying, “I am definitely out of character at this moment,” he said referring to to the fact that he wasn’t acting like our 16th president, “If I slip back in you can stage an intervention.”

Best Gal: Still my favorite chick to hang out with…Adele. She came into the Interview Room cackling before going upstairs to the Governors Ball. “One glass of champagne and I’m gone these days.” Everything is said with a wave and you feel like you are talking in her kitchen no matter where you are.

Michael Feinstein sang to a crowd that completely ignored him at the Governors Ball. Last year you could have heard a pin drop as Tony Bennett got the place swinging. Mixed reviews from the ball for host Seth MacFarlane from the crowd. The word I heard most was “awkward.” Wolfgang Puck was again serving his favs. Truffle pot pies were awfully good. The couple I kept running into was Tim Burton and Helena Bonham Carter. Next to Affleck, they were popular and you can spot each of their hairdos a mile away in the dark. As Daniel Day Lewis said at the end of the night, “I need to have a lie down for the next few years.” I think there are a lot of folks in Hollywood doing the same thing…at least for today.