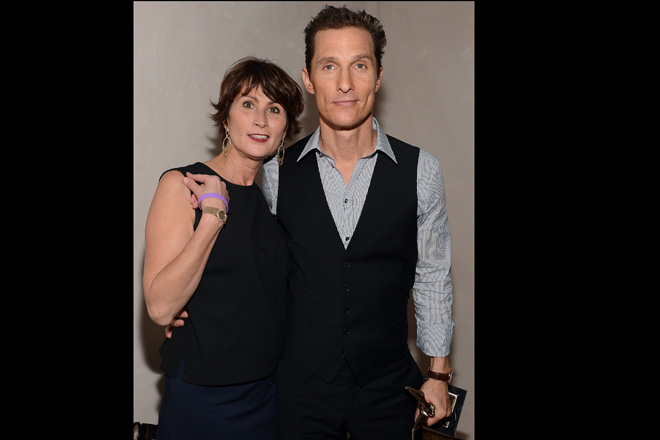 It’s always…ahem…very glamorous in the tent (and behind it) at Film Independent’s Spirit Awards. The f-word always gets a laugh, somebody always wants to get into a fight in the parking lot, and the beachside port-a-potties are first rate.

Before showtime this year, there was a traffic jam around Bradley Cooper. When Quvenzhane Wallis bounded through the open tent flap she ran straight up to Laura Dern like they’d been colleagues for years.  Here’s what else happened while I wandered…

Heeeeeeeey: I ran into Matthew McConaughey after he won Best Supporting Male for Magic Mike. I always love the names of the awards that this thing and will  forever think of Paul Giamatti saying to his wife one year, “Look honey, I’m the Best Male” when they announce the categories. I’ve seen filmmakers pitch Harvey Weinstein while in line to use the facilities, but decided not to chat up McConaughey as he dashed up the steps to the john. Captive audience.

After, when asked if he still uses any of the Magic Mike moves at home, McConaughey answered, “None of your business.” He went on to say that his costume for the stripper flick was inspired by “Baryshnikov and Richard Simmons” with a nod to Jim Morrison.

Be Nice: Helen Hunt came backstage to the interview room after she won Best Supporting Female for The Sessions. She’s not a big fan of the post-award interview room. She once got up to the mic at the Emmys to say so. That seems to be forgotten. But there she was with a smile. Her nudity vow? “I’m not taking it off again. That was it.”

Above All, Dignity: Early in the show, Jeremy Renner took offense to a crack host Andy Samberg (who was TERRIFIC) made about him. After all the vulture-shaped awards were handed out, Samberg hollered, “Jeremy Renner I will meet you in the parking lot!” False alarm. Renner was out there at the end of the show having a smoke, but not waiting to punch Samberg’s lights out. This was unlike the year Mickey Rourke got upset at host Rainn Wilson dressing up in tights as Rourke’s Wrestler character Randy “The Ram” Robinson. When they wanted a picture of the two gents together backstage, Rourke wasn’t having it and it caused a tense moment.

Indisposed: Best First Screenplay winner Derek Connolly never made it backstage after his epic acceptance speech (which prompted Bryan Cranston to join him onstage with some Jameson). His writing partner finally popped back to answer questions. Hey, not getting off the stage is allowed at the Spirit Awards. Remember Ally Sheedy? When she won for High Art in 1999, her loopy acceptance speech clocked in at over fifteen minutes.