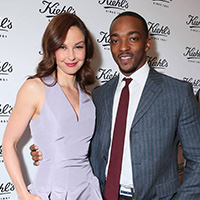 Every year around Earth Day, Kiehl’s throws a happy bash and gives an extra large check to a deserving green charity. Recycle Across America picked up the green again this year from the sales of the brand’s Rare Earth Deep Pore Cleansing Masque (100% of proceeds go to Recycle Across America). Last year Anthony Mackie popped by the annual bash as a guest, this year he and Ashley Judd are fronting for the project. He held court near the door of the crowded Montana Ave. store in Santa Monica while partiers congratulated him on his turn as superhero Falcon in the new Captain America flick (currently #1 at the box office). To cut through the crowd at one point Mackie picked up a friend and used her as a shield through the throng.

Judd took selfies with partiers before she and Mackie (along with Kiehl’s prez Chris Salgardo) presented the jumbo $50,000 check to the do-gooders. Who else did I spy with a cocktail and eating asparagus frittata and mushroom crostini from Akasha? Jennie Garth, Teddy Sears (terrific on Masters of Sex), Zoe Lister-Jones, and Gilles Marini (he goes to this bash as often as I do!).

Photographs by Alexandra Wyman for Invision