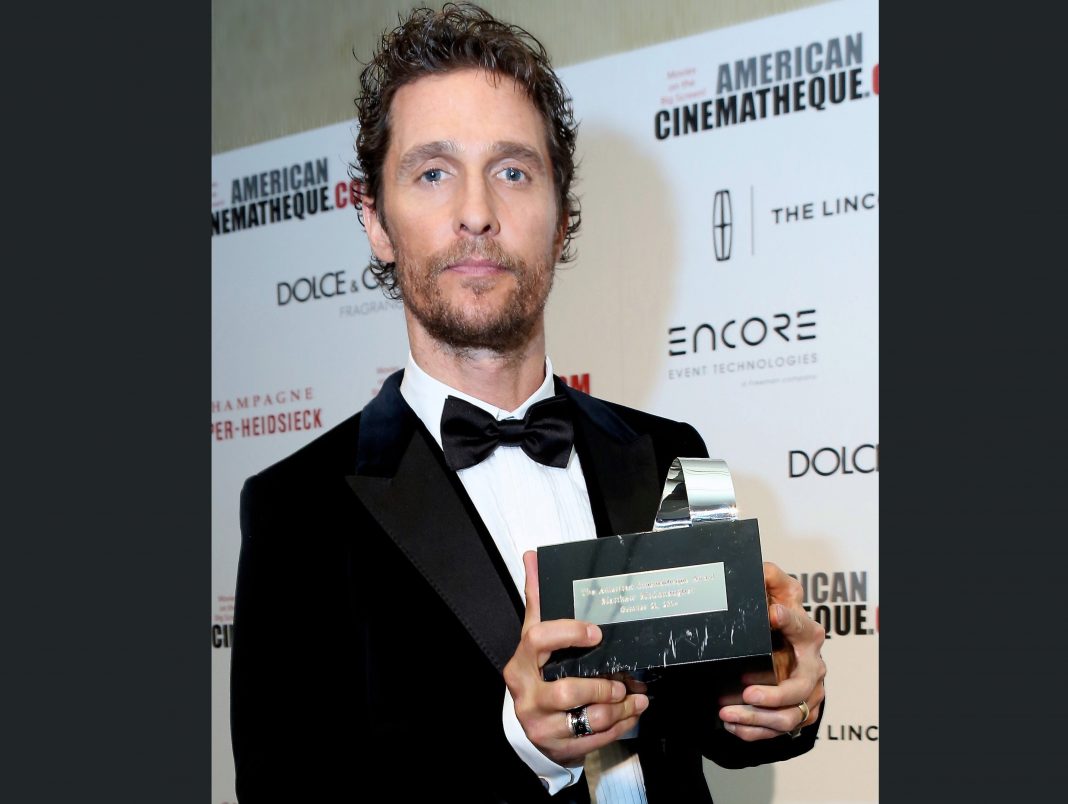 I have a theory about tribute awards (having covered many). If the first person to get up and talk about the honoree is funny, then the rest of the speakers will be poke fun at said honoree or tell hilarious tales. You don’t have to be a party pro to know that a room full of celebs talking about Matthew McConaughey before he received the American Cinematheque Award the other night would have interesting things to dish. Here is what friends and co-stars had to say about him before his received his “mid-career honor” as Cinematheque Chairman Rick Nicita dubbed the award.

Jimmy Kimmel: “He lost 85 lbs for his Lincoln commercials. He didn’t have to, it’s a very roomy car.”

Kate Hudson (who lost track of her friend during a vacation in Canada and went searching for him in the woods): “I found him standing on a rock, buck naked, like, howling and gesturing. I was like, there’s Matthew McConaughey and he’s fine. He’s totally fine.”

Anne Hathaway (who showed up at McConaughey’s house on the wrong day for a party): “He said to me, ‘Hey, we can be upset about this, we can be mad about this, or we go with it and we can have a great story.’” Apparently she stayed for four-plus bottles of wine and then proceeded to crash a surprise birthday party with him.

Reese Witherspoon: “He often signs his emails, ‘With purpose and by design.’”

Christopher Nolan (on how McConaughey intensely prepared for a scene in Interstellar): “I’d be explaining how I’d want him to play it, and he’d sort of grab me and push me. Being an Englishman, I don’t really like being touched very much. And being a very proud Englishman, every time he would push me I would say, ‘I’m terribly sorry Matthew, I’m terribly sorry.’” (They also showed a tantalizingly long clip of the film—it opens on November 7).

Matthew McConaughey (who was joined onstage by his daughter as he accepted the award): “It’s a magic trick we [storytellers] do. We play make believe, and when we do it really well, we make you believe.”

Ever stylish, McC wore a Dolce & Gabbana suit (sponsor alert) and a fancy Boucheron ring (double sponsor alert). The goody bag weighed a lot not because DVDs of the actor’s extensive oeuvre were included but because it contained a big bottle of Defiant Whisky.