Home Uncategorized All Aflutter For a Butterfly Flick 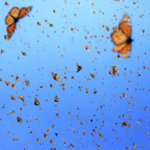 Actors really like to about the “journey” their characters take in certain films. If I am at home or covering something and anywhere near a glass of wine when I hear the word, I take a drink. It’s a saying that makes me groan, and apparently drink. There were no huge stars at the premiere of Flight of the Butterflies in 3D at the California Science Center the other week, but here is a story about characters that actually do make an interesting journey. The magical film is about monarch butterflies and the scientist who uses stickers to figure out their migration down to Mexico. It’s beautiful even if the dialogue may be a bit Hallmark Hall of Fame-y at times. I can describe it in three words: Butterflies. 3D. IMAX. If you don’t have to clear your throat when that old scientist finds one of his tagged butterflies amongst millions of them in the forest, then you’re made out of tougher stuff than I.

Why the King Tut Exhibit Coming to L.A. Is the Most Significant to Date