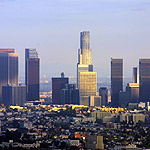 We hear it often from the celebrities who share with us their L.A. Stories: Los Angeles can be a difficult city to understand—especially for transplants. But the experience of falling for L.A. is one that unites Angelenos. Here, Los Angeles magazine staffers recall their early impressions of the city—and when they first knew it was love I rolled out here from Iowa in my red Chevy Cavalier 18+ years ago, right after graduating from the University of Iowa. I knew I liked L.A. within five minutes of arriving, even though the smog was so horrible that day, hanging brown and grey over downtown (either the air has gotten cleaner or I don’t notice it anymore).

My first apartment was crawling with cockroaches, and I was sleeping on the floor until I could afford a bed. Sometimes at night I would turn on the light just to watch them scatter on the linoleum floor of the kitchen (they were too big to fit inside the doors of the roach motels I’d bought). A few times when I went to squish one it would go running up my arm and into my clothes. Quick little suckers. But eventually the manager felt bad and gave me a bigger, better place for the same money. Then I learned how to find a good place in such a large city: Start with Westside Rentals and troll neighborhoods from there. I’ve lived in five different neighborhoods since I’ve lived here: Culver City, Santa Monica, Beverly Hills, Venice and Los Feliz. Loved each of them.

It took me six or seven years to understand L.A., especially with all of the strange things that happened to me right after I moved out here. A couple of months into my first job, the phone company shut off the phones in our offices, and I went down to the payphone in the parking garage to call my mom. I was sobbing and told her I thought this might be really bad. As in, “Mom,” Sniff. “This. Is. Really. Bad.” Sniff. She told me it was just first job jitters and it would pass. The Sheriff who showed up in our office a few days later (my boss owed money to several people) told me the opposite thing. Needless to say, I turned in my notice.

I fled to a temp agency, where I was asked if I minded “Adult literature.” A lot of good writers had come from Playboy and other such publications so I thought, why not? When I went on the interview, I picked up one of the many mags on a glass coffee table in the lobby: Hustler. At the time, I’d never heard of it or Larry Flynt. After a long buzz, two enormous doors swung open and I went in to interview. Three stops later, I had a new job.  At the time, Flynt published several magazines, and I went to work as an editorial assistant for a few of them. Part of my job also involved working in Mr. Flynt’s office—second assistant stuff. I got a kick out of him.

The strange thing is, even though all of these huge life changes took place in the first 6-8 months I was here, it never occurred to me to move or leave—to be anywhere else but L.A. The first person I met, Lea, who opened the door for me at my first job, remains one of my great friends to this day. (Amazingly, she still likes me even though I ratted her out when the Sheriffs asked me who kept the books. As it were, she didn’t even do the books.)

L.A. got better for me when I started forming relationships: it’s the people of the city; it’s friends like Lea and her husband Jay. Folks here—transplants and natives alike—are their own special breed.  They have good hearts, work hard, know when to let loose, and are always up for something new. Forget Vegas. There’s a lot of gambling going on here. It takes a lot of work to make something look easy, and I learned that in my first year here.