Home Uncategorized Water Logged: A Q&A with Matt White About His February Feature, “The... 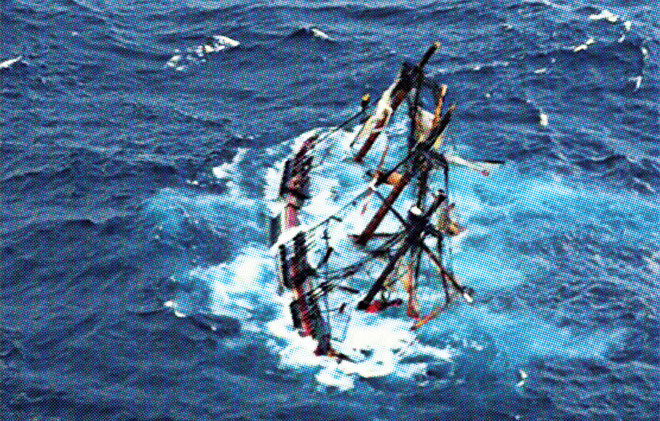 Matt White, who writes about the life and death of former USC Song Girl Claudene Christian in our February issue, talks with managing editor Ann Herold about Christian’s last moments spent aboard the tall ship Bounty in the Atlantic during Hurricane Sandy—and the unusual course his own life has taken since he was a USC student

You were a student at USC at the same time that Song Girl Claudene Christian attended the university. Talk about the Song Girl mystique.
I don’t think it’s controversial to say they are the most famous college cheerleading team in the country.  Just one example: My former roommate at USC is now a doctor in Austin, Texas.  He told his wife I was doing this story while they were at a party, and she said, “Are these Song Girls a big deal?”  He said they were, but she was skeptical, so they started asking random people at this party in Austin: Ever heard of the Song Girls?  And every single person went, “Oh, at USC?  Yeah, the white sweaters. They’re great.” Or something along those lines.  After a while his wife was like, OK, enough, I get it.

Also, Deadspin, which broke the Manti Te’o story recently, likes to give them a lot of coverage in their tongue-in-cheek, slightly obsessive way.  In 2008, they put out a “Scouting Report” on that year’s team. That kind of thing.

USC’s extended community—alumni, boosters, etcetera—identify strong with the school’s icon and don’t like them to change.  The Song Girls still stand at attention, move with the same discipline, and wear the same sweaters they did 30 or 40 years ago.  In fact, in the ’90s, they changed shoes from red to white and got angry letters.

Lori Nelson, the Song Girls coach, is sure that Claudene is the first Song Girl to pass away in the team’s 44 years. She’s positive that none of the women she’s coached since 1988, Claudene’s first year, have died, and there’s only been a little more than 200 total.  I was really impressed by that, not as some kind of dark trivia but because just the fact that she knew that shows how tight-knit the bonds are in that community.

After USC, you worked in journalism but then left to join Air Force Pararescue. Describe that decision and the rigorous selection process and training you underwent. It gave you unique, insider knowledge of the rescue of the Bounty crew.
I was a reporter for the Philadelphia Inquirer for close to three years and then in Newport News, Virginia, for about a year.  But I spent a lot of my spare time running and swimming, that kind of thing, and somewhere along the way stumbled across Pararescue. As I learned more about the job, the search-and-rescue mission, and the level of training, I realized I wanted to be part of it.

The initial training—”selection,” as it’s called—is what you’d imagine: extremely demanding physically, even more demanding mentally. And of course, the difficulty and extremely high bar that the training sets are probably Pararescue’s best recruiting tool.  You only get candidates who are looking to be pushed, looking for a challenge that you really can’t find in civilian life or even elsewhere in the military.  There’s all the running and push-ups and crawling through mud you’d expect, but the central crux is the mind games you have to play during hours of underwater exercises in the pool, holding your breath. You have to learn to stay calm enough underwater to, say, tie a series of complicated knots or untangle your diving gear, knowing that if you surface for air, you’re kicked out. It sounds trite, but it’s true: Later, when you get into stressful spots on missions, you can always reach a little deeper by thinking, “Well, at least I can breathe.” Once you get through ten weeks of that—about 15 percent make it—you go on to scuba training, free fall parachuting, mountain rescue, weapons and tactics, etcetera.  Then once you’re on a team, you pretty quickly find yourself in the middle of every major operation the U.S. military does.

I joined in 1998 and, after 9/11, deployed to Afghanistan three times and Africa once. I also was on the Pararescue team in Alaska for three years.

What were some of the astounding things you learned while reporting the story that were left out of the piece for space reasons?
Well, the first thing we should say is this: 16 people went into the water in the teeth of the biggest hurricane of all time, and the Coast Guard went out there and got 14 of them back.  In fact, that stretch of ocean is known as the Graveyard of the Atlantic. Obviously I get into the rescue in the story because it’s what got me initially interested.  But by telling the story of one of the people who did not come home, it’s easy to lose sight of what a grand slam the Bounty represents as a rescue.

I also thought it was interesting that Dina, Claudene’s mom, said that after the sinking, members of the USC band got in touch with her. I think it’s fair to say that there’s a social divide between the band and the Song Girls. But the band people who contacted Dina told her Claudene was the one Song Girl who had gone out of her way to be friends with them, and my doctor-roommate at USC even remembers her for that reason.

As for what’s missing, it’s not entirely clear what happened that night.  The power went out on the Bounty, and once that happened, it was probably only a matter of time, and that’s how I approached the final night in the story.  But from my interviews and what’s been reported, there are real discrepancies in the series of events that led up to it.  The Coast Guard is holding an eight-day hearing on the accident this month.

By the time you finished the piece, what did you admire most about Claudene? Would you have been her friend at USC?
Well, let’s just say there weren’t a lot of Song Girls looking to spend their off-hours hanging out with the aspiring newspaper set.  But I hope we might have been friends. In fact, in some ways I wish I was more like her.  I mean, coming from Alaska, she made herself into the quintessential California girl as a Song Girl. As a 19-year-old, she started and ran a campus start-up company 20 years before the Facebook era made that seem less crazy. She quit a great job in her twenties to be a singer. And when it all came apart, rather than admit defeat, she went and found not just a job but a place in a community on these tall ships that was beautiful and different and exciting, and she was probably on her way to making it a life. Not many people truly trust themselves enough to go out on that many high wires. Actually, just about everyone I talked to for this story—not just her friends but lawyers, old bosses, even a reporter who only met her once—looked at Claudene as an inspiration for living boldly.

You now live in North Carolina, where the tall ships are a regular attraction. Will you take your kids to see one and tell them the story of the Bounty? After experiencing the Pacific as a student, how do you find the Atlantic?
After this story, I may sign up myself.  They’re one of those subjects that, if you ask one question, suddenly you’re asking ten more and realizing that you’ve just stumbled onto the first five minutes of a subject that it would take 50 years to learn.  You can’t tell any serious kind of world history—and certainly not of this country’s—without understanding these ships. I completely understand why people, especially people like Claudene who was obviously born with wanderlust, fall in love with them. Not sure my six- and three-year-olds would appreciate them yet, but we’ll see.

As for the Pacific versus the Atlantic, you have to keep in mind: If you live anywhere between Key West and Maine, the chances are that every two or three years the Atlantic is going to rise up over the beach and try to kill you. People in the East love the water, going to the beach, fishing and boating as much as anyone in the West, but that underlying relationship is built on a different dynamic.

To read “The USC Song Girl and the Sea,” pick up a copy of the February issue on newsstands or subscribe NOW.