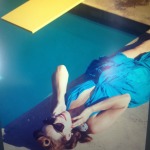 Before Lili Taylor and Michael Ealy appear together in J.J. Abrams’ upcoming sci-fi drama Almost Human on Fox, they can be seen in fall’s brightest looks in the fashion feature that appears in the November issue of Los Angeles. At the moment, the final product—a six-page story photographed by Rene + Radka at the iconic Stahl House—can be seen only in the print edition of the magazine (on newsstands now), but we’re not waiting to share this behind-the-scenes video, which shows what happened when the actors spent six hours on our sun-soaked set:

Here’s how the photoshoot came together: Lili and Michael were in Los Angeles for one weekend only to promote their new show, but their schedules were jammed with media appearances and interviews. Luckily, we were able to book the only free chunk of time before they were scheduled to fly back to Vancouver to begin filming Almost Human. Once we knew Lili and Michael were locked in we began hammering out concepts and pouring through fall runway looks. The overall concept for this story was first sparked by the news that LACMA was going to honor painter David Hockney at their annual Film + Art Gala in November (the museum will also showcase a new film installation by the artist). Using Hockney’s work as inspiration isn’t a groundbreaking idea—they have been recreated in photoshoots many times before (we even did this ourselves a while back). So, rather than try to faithfully imitate Hockney’s paintings, we decided to use them as a source of inspiration. They informed the color palette and the mood and tone of our shoot. In the end, Hockney’s saturated masterpieces worked perfectly as a backdrop for the fall runway trends I found to be the most surprising—mainly bright colors like vivid aqua and hot pink (which was styled next to crimson velvet at Diane von Furstenberg) or the chartreuse turtleneck sweaters and purple velvet pants in Etro’s menswear show. Producing a photo shoot at the Stahl House was a dream for me. On set, we built on Hockney’s motifs, from isolation and separation to the blissful indulgence of time spent alone. The last shot of the day found Taylor doing underwater laps in the unheated pool and the actress didn’t bat a mascara-coated eyelash. After we wrapped we offered to blow dry her hair. She declined, threw her wet locks into a pony, and headed to the airport. It was a refreshing end to this special shoot.