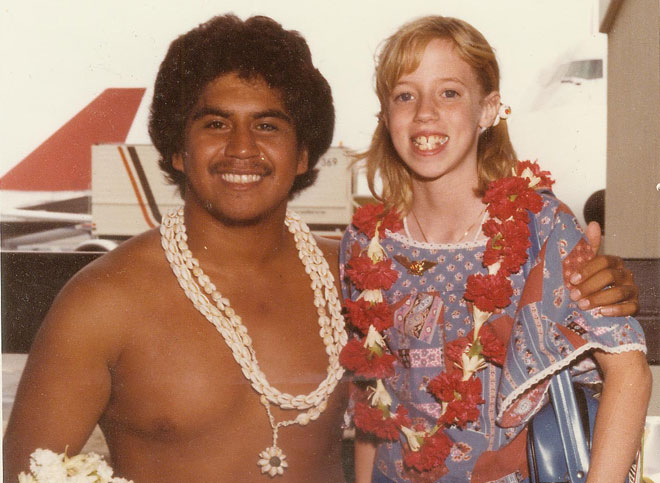 Melton in Hawaii as a child

The November issue of Los Angeles magazine presents our annual Food Lovers Guide to L.A., but it also looks beyond the city limits. “On Hawaii Time,” a feature by Matt Jaffe, offers a new way to explore our favorite archipelago—by road-tripping on the Big Island, shaking the crowds on Kauai, canvassing one hemisphere of Maui, and escaping the tourist traffic of Waikiki on Oahu. Our editor-in-chief, Mary Melton, is intimately familiar with the subject of our 50th state. She’s been a frequent visitor to the islands since her childhood—and now owns hundreds of Hawaiian items. Here’s how the collection, which spills from the L.A. home she shares with her husband and son to the tiki bar they’ve built outside, began:

When did you start collecting Hawaiiana?
It started with my parents. They went to Hawaii on a trip—one of those “Pleasant Hawaiian Holiday” package tours. I still have the ad from the newspaper that my dad cut out for that trip. Because it turned out to be such an important one, they kept it in a scrapbook. It was like $298, everything included. We were a traveling family, but my parents had never been to Hawaii, so they went there on their own in 1978 and fell in love. They couldn’t believe they were actually in America because it was so tropical and otherworldly. They weren’t big beach people, but they had varied interests, and they just threw themselves into the places they traveled to. They were already collectors—they came from collecting families—and when they got back from Hawaii, my dad, who was a book collector, started to buy books about the Hawaiian Islands. Later, when he was talking to his sister about the trip, she told him that in fact we were directly related to Captain James Cook, the English explorer who had “discovered” Hawaii, and it came full circle to him as to why he felt this strong connection to the islands. Cook was a direct uncle up the family tree, so that just fired my dad up. My parents started collecting Hawaiiana, and the next year they brought all the kids to Hawaii so we could experience it, too. From there it became a family tradition. Every summer, every winter for the next ten years, that’s where we went when we took trips.

Did you always visit the same place?
We almost always stayed at the Outrigger Reef, which is on the main tourist drag of Waikiki Beach. In 1979, there weren’t many high-rises, and I remember being there when the Sheraton towers were being built. Back then the Halekulani was a dump! It was run-down, but charmingly so. Now it’s the luxury hotel in Waikiki. Anyway, the Reef was a place for middle-class families, and we were such regulars, we would always stay in room 2A. We got to know the people at the front desk, and there was a beach bum named Barry who had a coconut stand right in front of our room on the sand. He was really sweet, and he would go up this coconut palm tree and get me coconuts, then come back down and throw them onto our balcony. Over our visits the Reef started getting more upscale, and they added an outdoor theater. From our balcony in room 2A you could see out onto it, so we had free seats to whatever was showing. There was a really popular comedian named Andy Bumatai, and I saw his shtick probably 100 times over the course of my teenage years.

I’m imagining your family arriving in Hawaii with empty suitcases and getting on the plane to fly home with all your purchases.
We did, but what my parents really ended up collecting was paintings—they had hundreds of them—and most were found in thrift shops and flea markets on the mainland. They weren’t really into the cheap tchotchkes; they were more into antiques. But we would always come back with stuff.

How quickly did your house fill up with Hawaiian items?
It didn’t take long. This was way before eBay, when you really had to search for stuff. My parents would travel to different cities and find things and not be able to carry them back, so we were always getting weird things shipped to us. It wasn’t that big of a house, and it was a pack rat kind of situation, so what my parents did was redesign the whole interior to be tropical. It became this little tropical oasis in the middle of the San Fernando Valley. We even built a bar in the back. The art was Hawaiian and the furniture was Hawaiian—rattan and bamboo and things they found in thrift shops. My dad’s whole wardrobe even changed. He was a schoolteacher, and he wore a Hawaiian shirt to school from 1982 until he retired in 1992.

After my dad passed away, we had to sell my mother’s house and downsize, so my brothers and I distributed the paintings among us. My mom is in a retirement home now, and it’s hilarious: You walk by the other rooms and they’re kind of plain, and then you see my mother’s room and it’s like Waikiki exploded. She’s easily got 150 pieces—tchotchkes, tiki mugs, paintings, photography. There’s a lot of great stuff in there.

When did you start your own collection? Do you remember the first piece you bought?
The first real piece I owned I didn’t buy—my parents gave it to me as an engagement gift. It’s a beautiful metal hula girl lamp from the 1930s with an actual grass skirt, and her hips swivel in a hula dance. Those lamps are coveted now, but I think the one they found was from a thrift shop in Arkansas. I’m not nearly as die-hard as my parents were, but when I see things, I pick them up.

I have a small collection of magazines, and my husband didn’t exactly embrace it when we moved in together. What did your husband-to-be make of all your Hawaii-themed stuff?
He has been very open to all of the craziness because it’s just in my family’s genes, but he was game to the aesthetic, too. It’s very relaxing to come home to a tropical retreat! I think what sealed the deal was his first trip with me to Hawaii. He had never been, and we went together after dating for a few years, and he was just as smitten as we all were. He and I have been to all of the islands together now. Even in the new, more-refurbished Hawaii there’s such a respect for culture, arts, and the incredible traditions there that it’s just infectious. He loves ukulele music, tropical drinks, and sitting outside, so it’s pretty easy to fall in love with the place.

You could open your own museum.
When we were selling my mom’s house, I asked Sven Kirsten, the writer of The Book of Tiki, to come over because I had questions about the value of some things, and we ended up selling a couple at auction. Sanford Dole was the governor of Hawaii, and my dad had had this huge cache of Dole memorabilia—we’re talking personal letters and family scrapbooks—that he had bought at a used bookstore in Anaheim. We felt it needed to be in safer hands. There were many books that we ended up selling as well, first editions of Cook’s Voyages, say, that should be somewhere where they can be preserved.

Is the collection still growing?
You can only have so much stuff inside your house, and I don’t want to be a hoarder, but we have a tiki bar outside and it got a little extreme this year. We used to have a smaller tiki bar, but it was blown apart in the December windstorm two years ago. We spent this summer rebuilding it. That gave us a lot more space, so we went back to the flea markets.

Hawaiiana is something I’ll always be attracted to. I love the Tiki Farm in San Clemente that makes tiki mugs, and there’s a couple, Kevin Kidney and Jody Daily, who do a lot of limited-edition work celebrating Disneyland’s Enchanted Tiki Room. As long as they continue to make pieces, I’ll be buying those.

What do your favorite pieces have in common?
The things I tend to be drawn to are joyous. Hawaii has a very complicated history and such a rich culture, but when I’m there, I feel a unique sense of peace and joy, so I’m drawn to that.

Worst-case scenario: There’s an emergency and you can only grab one item before leaving your home. Which piece do you run for?
It’s got to be the hula girl lamp. I have two now, but I know which one’s older, and that would go under one arm. The challenge would be in deciding what to put under my other arm.

What tips would you share with someone who is interested in investing in a piece of Hawaiiana or beginning his or her own collection?
It’s remarkable how you can still find these things at flea markets and thrift stores because people in Southern California have been visiting the islands for the last 50 years. Don’t be surprised to walk into a thrift store in Twentynine Palms and find a tropical punch bowl from Don the Beachcomber.

The Tiki Farm, which I mentioned, is a great source because they do limited editions of really fun ceramics. Stop number one in all of Southern California is Oceanic Arts in Whittier, which is still run by the two guys who started it in the 1950s. They were the main suppliers of a lot of what you see in the hotels of Waikiki today, so that’s a must-stop if you’re interested in starting a Hawaiian collection or building a tiki bar or throwing a Hawaiian party. That place is incredible.

I take it having a home tiki bar is a must?
Absolutely! You have to have a retreat where you can play some Jake Shimabukuro or Israel Kamakawiwo’ole or whoever you like and just melt. You must be a really tense and unhappy person if that doesn’t make you relax in Southern California, where the weather is just so fantastic. I love the morning storms in Hawaii, but L.A. is pretty darn close. There’s no replacing the original, of course, but having a tiki bar here can go a long way.

Here are a few highlights from Melton’s collection:

To read “On Hawaii Time” pick up a copy of the November issue on newsstands or subscribe now.