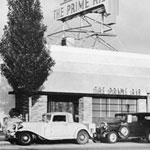 In this October Ask Chris column, Chris Nichols debunked the myth that valet parking in L.A. originated at either the Brown Derby or Lawry’s the Prime Rib, noting it was already a practice at movie premieres and down- town garages. “You have misinformation,” wrote Merwin Koeppel, who says he oversaw the Lawry’s lot in 1945. “Parking was always free, and it was never called valet.” Chris was addressing the practice of having others park our cars, not when businesses began rooking us for the service. But the 84-year-old former valet offers a colorful glimpse into what life in L.A. was like in the era of black-and-white:

On tipping: “Most people gave a quarter. The only guy to ever stiff me was William Demarest.”

On wartime L.A.: “Until the surrender of Japan, we had meatless Tuesdays at Lawry’s.”

On life: “I went to UCLA when it was free. Iwasalsoa syndicated turf writer for five dailies. Hated deadlines.”

For the First Time in 30 Years, Changes Are Coming to This Iconic L.A. Restaurant