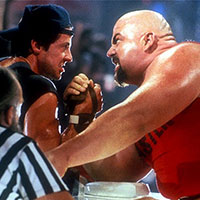 There are those who remember the 1980s—and then there are those who can remember the decade that changed L.A. like it was yesterday. Two of those ‘80s obsessives are right here at Los Angeles magazine: Alison Martino, columnist and founder of Vintage Los Angeles, and Mary Melton, L.A. mag’s editor-in-chief. Who is the most ‘80s L.A.? To find out we challenged Martino and Melton to a smackdown, held in our conference room with associate editor Chris Nichols as judge. The competition was fierce—Martino and Melton presented items in 15 categories that led to a late-breaking lightening round—but only one could be champion. The stakes were high: The winner received a free ride around L.A. with icon Angelyne (in her signature pink corvette).

Here, we recap the competition with Martino and Melton making a case for their retro collectibles. Did Nichols give the prize to the most deserving competitor? You be the judge. Alison Martino’s item: A flyer to meet Madonna at the ABC Entertainment Center. “She was making an appearance at a screening of Desperately Seeking Susan at the Plitt Theatre in 1984.”

Mary Melton’s item: Chick Hearn’s “Rap Around. “Talk about Showtime! Chick Hearn “Rap-Around” is a 12-inch single released in 1986 of Chick-isms from the late, great Lakers announcer set to electronic music. This game’s in the refrigerator, folks.” Martino: The Outsiders movie scrapbook. “I was obsessed with The Outsiders and made a scrapbook of every teen magazine clipping I could find of the entire cast.”

Melton: Kathleen Turner’s sheet from the movie Crimes of Passion. “Early in his career, my brother, Greg, was a set decorator on Ken Russell’s kinky 1984 movie Crimes of Passion. It was one of the first movie sets I spent time on (though I was a teen it surprisingly didn’t damage me for life). When production wrapped, Greg ended up with a bunch of stuff from the set. Somehow I went home with the (don’t worry, it’s been washed 1,000 times) purple Wamsutta sheet from Kathleen Turner’s bed.” Martino: An original Keith Haring radio “purchased at the Bijou in Century City in 1986.”

Melton: A Sony Walkman. “Come on, nothing says 1980s electronics more than a Sony Walkman. They weigh a ton in comparison to an iPod but this little baby still scores high for fidelity. Provenance? Likely Radio Shack.” Martino: A Pac Man game in the original box “purchased during the ‘Pac Man Fever’ craze in the early ’80’s at Toys Are Us.”

Melton: A Snoopy Sno-Cone Machine. “It exemplifies my favorite dog’s emergence as a merchandising powerhouse in the 1980s. I’ve held on to the Sno-Cone (and my ’70s Snoopy stuffed animal and his entire costume wardrobe), despite the fact that it works like crap.” Martino: An autographed baseball from the Angels. “My father (Al Martino) sang the National Anthem at the Angels opening game in 1980. This baseball is from that game, signed from the promoter with the date.” Martino: A picture disc of the 1984 Olympic Games with the main theme. “It was purchased at Rhino Records.”

Melton: A ticket from the Olympics. “Cue the theme song: I was there at the Coliseum, watching a track-and-field competition at the 1984 Summer Olympics, when American favorite Mary Decker fell (or was tripped by South African Zola Budd, you be the judge) in the 3000 meters. Here’s the ticket to prove it. The shock sucked the air right out of the place.” Martino: A Camp Beverly Hills ashtray “purchased at the store in 1984!”

Melton: A Marineland patch. “Of the many places in L.A. that fall under “things that aren’t there anymore,” the loss of Marineland still stings. This patch (naturally I have a huge patch collection) commemorates the former Palos Verdes Peninsula tourist attraction when it was owned by animation giant Hanna-Barbera. (What Fred Flintstone had to do with an oceanarium is still beyond me.) It’s now the swanky Terranea Resort.”

ROUND 8: Best Item of Clothing or Shoe Martino: A denim vest. “This is the vest I wore in 1984 decorated with pins including Duran Duran, Prince, and Billy Idol.”

Melton: A pair of pink Capezio dance shoes. “I wore these pink dance shoes, purchased from the now-defunct Capezio store on Vine Street, in Hollywood High’s 1986 production of A Chorus Line. I’ve got my “One” finale outfit, too; sadly, my pink leg warmers have disappeared.” Martino: An adolescent picture in a photo booth. “This photo strip was taken in a photo booth on the Santa Monica Pier. My outfit included a ‘Frankie Says’ T-shirt, rhinestone jewelry, rubber brackets, and Ray-Bans.”

Melton: A Christmas morning snapshot with a Cabbage Patch Doll. “It was a Christmas miracle: the elated moment I have opened my very own Cabbage Patch Doll in the pre-dawn hours of December 25, likely 1983. I was enchanted with it for about 20 minutes. Snoopy is really how I roll.”

ROUND 10: Best Item Saved From the Trash Martino: A plastic shopping bag. “This is an original bag from the novelty store Heaven at the Century City Mall.”

Melton: A piece of the original Happy Foot/Sad Foot sign. “Mini-malls started in L.A. (you’re welcome, world!) and by the ’80s had become ubiquitous. Most are anonymous—almost all are architectural abominations. But the one in Silver Lake that houses the Happy Foot/Sad Foot sign (for a foot clinic) has become a beloved local landmark. The original sign was pink Plexiglass. Driving by one evening I noticed the sign was being replaced. I pulled into the lot and salvaged from the wreckage this little foot. It makes me happy. And sad.”

ROUND 11: Best Restaurant or Club Memorabilia Melton: Farrell’s straw hat. “Farrell’s offered old-timey nostalgia for our family for decades. In junior high, it’s where we held our after-party for theater productions. This straw hat doubles as a bank. I’ve got at least 35 cents in there.“

ROUND 12: Something That Represents the Ultimate L.A. Store Martino: Nothing. “Disqualified! I forgot my original Tower Records bag!”

Melton: A Camp Beverly Hills key chain. “Heaven and Aahs were sweet, but Camp Beverly Hills is where it was at. I’m pretty sure I harangued my folks until they took me to the Rodeo Drive store, which was nowhere near our house, where I bought this key chain (it hung off my back pack for years).”

ROUND 13: Most Embarrassing Item Martino: A Keith Haring condom holder. “It included a clip to attach to your belt or pants. It was empty inside!”

Melton: A “preppy” notebook featuring an eighth-grade poem. “Oh, I had many shameful pieces to choose from. This poem written during my preppy phase for an eighth grade English class (when my Izod-worship should have been clinically treated) is one of the most painful: ‘Being real prep/Is being real hep/If you ask Mary/The alligator fairy.’” Martino: A signed photo from Wally George, conservative radio and television host. “This was signed by Wally at a taping of his Hot Seat show taped at KDOC.”

Melton: A signed photo of O.J. Simpson. “On the set of the short-lived 1980s HBO series 1st & Ten, my mom not only met O.J. Simpson but took a Polaroid with him, which he inscribed: ‘Wishing you peace + love.’ She looks a little scared. Martino: A copy of the L.A. Weekly from 1984. “Inside included ads for all the clubs and movies playing at the time.”

Melton: A homemade ‘zine. “Another mortifying school creation, one of my first endeavors in magazine making: a pseudo issue of Variety devoted to Elizabeth Taylor. The Xeroxed pictures are a nice touch. No wonder I didn’t become an art director. The whole thing looks like a ransom note.”

If you’ve been paying attention, you know that Martino and Melton tied for first place in the regulation rounds. The tie-breaker? A wild card: Choose any object to present. Martino: A picture from the set of Poltergeist, posed with Heather O’Rourke, who is better known to audiences as the TV-inhabiting Carol Anne.

Melton: A signed photo of Michael Jackson nabbed on the set of the Captain EO video shoot.

Martino edged out Melton with her super-freaky photo of the haunting child star who passed away in 1988. Congrats to Alison Martino of Vintage Los Angeles, who wins a FREE CORVETTE RIDE with L.A. icon Angelyne!