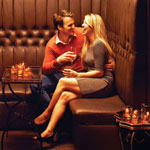 After six months of living in what we lovingly refer to as “our mini commune,” my roommate Jeremy Seglem decided to get his own place. When he found a one bedroom a few streets away we listed his room on Craigslist. Kristin Kennedy was one of a dozen people who came to look at it, and I could tell Jeremy, who hung around for the open house, was instantly smitten. My other roommates and I all loved Kristin, too—she is upbeat and easygoing—so we invited her to move in. Kristin had been working up in Lake Arrowhead and needed some furniture, so she worked out a deal with Jeremy to buy his brand new bed. When she came back a few days later to bring him the money she owed, he asked her on a date. They hit it off and we hardly saw Kristin after that. Whenever we did, Jeremy was in tow. “Didn’t we get rid of you?” I would tease him. Jeremy and Kristin were inseparable and just the cutest damn couple. So when the magazine was looking for couples to model for our February issue, I asked them both to do it. Actually, I guilted them into it (the shoot took place on my birthday). On the day of the shoot we photographed four different couples and even mixed and matched to create new ones, but the genuine chemistry between Jeremy and Kristin made them the obvious choice for our cover.

Two months after first meeting Jeremy, Kristin gave me her 30 day’s notice and moved in with him. It’s fitting that they were chosen as the cover models for our issue, because love is one of those things that can be hard to find in this town. Who would have thought it could be found through a Craigslist house search?