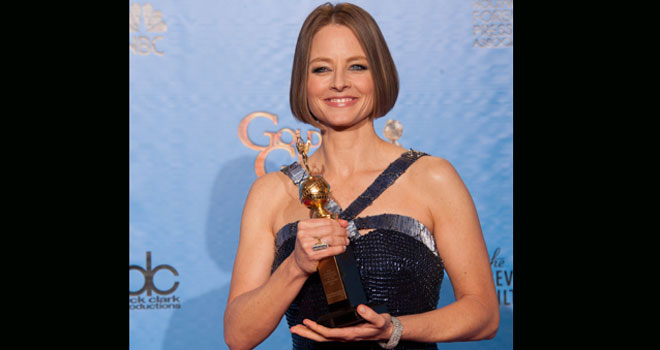 Much has been written about Jodie Foster in the hours since her mish-mash of a poignant, brilliant speech at the Golden Globes. Did she come out as being a lesbian? Yes, in a way that was somehow both definitive and circular.  Should it matter that she loves women? Of course not, though it does matter that she is willing to say so publically. Does she deserve privacy? Yes, but getting up in front of millions of eyeballs on a national awards show is an odd place to ask for it.

More interesting to us, though, is the other “admission” the 50-year-old actor/director/Oscar winner made as she accepted the Hollywood Foreign Press’ Lifetime Achievement Award. No, we’re not talking about the fact that she’s single. We speak of the fact that Mel Gibson is apparently one of her closest friends—close enough to bring as her date (she could’ve just gone with her sons, right?), close enough to be the one who presented Foster with a stuffed hamster on a silver platter (we love Robert Downey Jr., but that joke fell flat), and close enough to get a twinkly-eyed shout out from Foster, whose last directorial effort, The Beaver, starred Gibson and was released in the wake of the scandal surrounding his anti-Semitic, homophobic, sexist beliefs. She did it in the context of talking about her family and friends–the “lifers” who have been her support system. “You know,” she told Gibson from the stage, “you saved me too.”

There is no way to know the foundation upon which the Foster-Gibson friendship is built, though she must admire his willingness as a director to take on controversial topics. For years, Foster talked openly about wanting to make a film about the filmmaker and photographer Leni Riefenstahl, whose film Triumph of the Will some people argue was responsible for Hitler’s rise. The idea is as audacious and potentially controversial as Gibson’s 2004 indie blockbuster Passion of the Christ. But what perplexes us is that Foster’s rationale for developing that script, as she told Los Angeles back in 2002, was that she feels it brings to the fore the issue of artists’ responsibility. “Fascist art makes form and beauty more important than anything else, which is basically superficial thinking. But artists need to be deeper thinkers,” she told me in that interview. “Because if you just stay on the surface, like all sorts of things we do in Hollywood, without realizing it you can move the consciousness of the country in a direction that’s not only dangerous but cruel.”

Foster’s speech last night went way deeper than the surface, and we commend her for it. But endorsing a man whose beliefs seem centered around stereotypes and cruelty was a weird way to punctuate that message.