Home Uncategorized The F-Stop: A Declaration of War 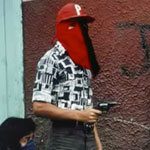 The pain, weirdness and brutality of war are all around you at the Annenberg Space for Photography’s new War/Photography exhibit. I had to cry when I watched the documentary about the men and women who risked their lives to show the truth of warfare with their lenses, and even though I’ve seen it a million times already, a chill ran through me as I looked at Robert Clark’s four images of the planes hitting the World Trade Center towers on 9/11. I was living just over a mile away in Manhattan at that time, and Clark’s photographs had me smelling the acrid stench of the burning buildings all over again. Ten years after the start of Iraq War, this is a show everyone should see—especially before we send more kids off to fight in distant conflicts.