Home Crime The Evidence Locker: Inside the Case of The Golden State Killer 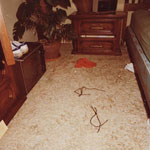 Keith and Patrice Harrington. They were found bludgeoned to death in a bedroom of their home in Dana Point on August 19, 1980.  They had been married for only a few months when they became the Golden State Killer’s victims. This photo is from the East Area Rapist Task Force files and is an example of the type of home the Golden State Killer (known as EAR by authorities) routinely chose for an attack: single story with a detached garage in a middle- to upper-middle-class neighborhood. Ligatures used by the Golden State Killer in an attack in Northern California in the 1970s. When he attacked couples, the Golden State Killer frequently ordered the female victim to tie up the male. The killer would become agitated and threatening if he felt the knots were being tied too loosely. The aftermath of a Golden State Killer attack. Note the plates on the bed. One of his most twisted techniques was to stack dishes on top of a bound male victim’s back, telling him that if he heard the dishes fall, he’d kill the female, whom he would then lead into another room to rape. Ligatures on the floor. Note the towel near the bed. The Golden State Killer often threw towels over his victims’ heads as a head covering/blindfold. Shoelace ligatures cut off a victim in a Golden State Killer attack. An example of the kind of suburban neighborhood where the Golden State Killer prowled for victims. A shoe impression from the scene of a Golden State Killer attack. Another shoe impression from the East Area Rapist Task Force files. The Golden State Killer (known as EAR by authorities) preferred tennis or running shoes and was believed to wear a shoe size between 8½ and 9½. The Golden State Killer’s telltale shoe impressions were often left in the soft earth around a victim’s house as he circled, looking for a way inside. Another shoe impression from the task force files. Investigators spent time trying to determine what exact brand of shoe the Golden State Killer wore. Here is one possibility: the Adidas SL 72 running shoe, first launched at the 1972 Olympic Games in Munich. Another running shoe possibility: the New Balance 320, first released in 1976.