Home Uncategorized The Crack King is Back: Writer Jesse Katz On Hustling With Freeway... 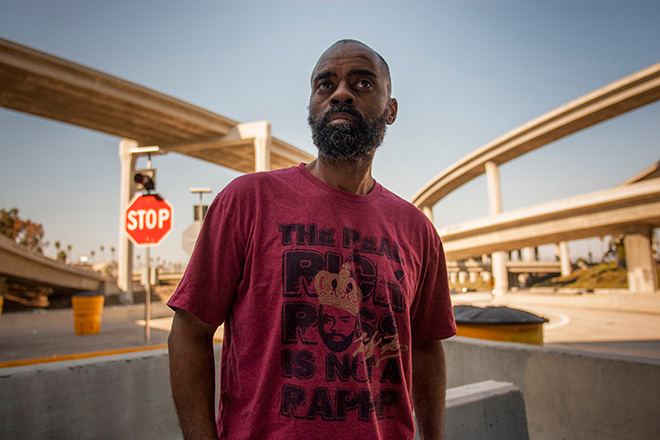 In the June issue on newsstands now, Jesse Katz writes about Ricky Ross, aka Freeway Rick, the notorious crack kingpin from the city’s troubled past. Out of prison (again), Ross is out to make his fortune the legitimate way this time around. Katz shadows him as he tries to sell T-shirts and human hair and his own life story, but Katz’s own relationship with Ross is part of the story as well: As a journalist with the Los Angeles Times, he first met Ross in 1994 and has been covering him on and off ever since. The result, “Freeway Rick Is Dreaming,” is a profile of remarkable depth and breadth. Katz’s editor, executive editor Matthew Segal, spoke with him about the story and about his process.

This is a topic we discussed during the edit process, but can you clarify for everyone what the proper nomenclature is—Ricky Ross or Rick Ross?
His legal name is Ricky. That’s how I first knew him: Ricky Ross. But when you add the moniker, for reasons I can’t quite explain, he becomes Freeway Rick. In any case, he’s 53 now. I think only his mom still calls him Ricky.

You first met Rick in 1994 and wrote about him several times, including a 1998 profile for our sister publication Texas Monthly. It’s clear in the story that you wanted to sort of clarify a few matters in that later piece—we’ll get back to that in a bit—but what else keeps you coming back to Rick? Part of you clearly admires him.
Rick’s alive. I mean that in every sense. He lives fearlessly. Shamelessly, too, I suppose. But he’s always extracting everything from every day, drinking about as deeply as you can from the cup. That sounds pretty corny, but I feel like we’re surrounded by people who complain about whatever, being bored or lonely or tired or unfulfilled. No life of “quiet desperation” for Rick. I find that enormously appealing.

He comes off as a celebrity, a politician, and an operator. What have I left out, and which characteristic stands out most?
Oh, you could probably add psychologist, shaman, Pollyanna, and Svengali. Rick’s uncommonly skilled at winning over believers—of making outlandish propositions and getting people to buy in.

Now, we should clarify that you’d been covering gangs for the Times when he first came onto your radar, and you’d spoken with plenty of criminals up to that point.
We should clarify that Rick’s not a gangbanger. In some ways, he’s just the opposite. Gangs are all emotion, despair masquerading as bluster. They’re about inflicting harm on your mirror image. Rick’s a capitalist. Part of what made him successful as a drug dealer—and, frankly, more interesting than your average Blood or Crip—was his ability to cross boundaries, his willingness to transcend neighborhood allegiances.

The crack epidemic that he rode wrought complete havoc on poorer neighborhoods in the city. You witnessed the devastation during your reporting. Can you give a quick sense of what it was like?
It’s a little hard to fathom these days, with crime at record lows and the central city fast gentrifying, but the L.A. of the late ’80s and early ’90s was insane. There were close to 2,000 homicides a year in the county back then; today, I think it’s more like 500 or 600. There were entire blocks that had been relinquished, where you couldn’t drive through without getting swarmed by young dudes with gold chains and beepers. Not that the legacy of crack isn’t still with us, but you had a real sense at the time of something both irresistible and utterly toxic sweeping through our communities.

Rick, as with others disciplined in the art of positive thinking, doesn’t look back much on his role, does he?
Rick’s essentially amoral. He doesn’t want to hurt people—he’d rather be loved—but if people do or did get hurt by his shenanigans, I don’t think he loses a lot of sleep over it. A friend recently turned me onto a line from Hamlet: “Conscience doth make cowards of us all.” Rick’s kind of freed himself up.

You, on the other hand, look back on your own coverage of Rick, calling it at times truthful but not always honest. What’s the distinction?
A story can be entirely factual—it’d better be entirely factual—and yet still sort of convey a picture that’s not as nuanced or transparent as you’d like. In a newspaper environment, where there’s an institutional voice, it’s harder for a journalist to peel back the curtain and tell the story that you’d tell if you were, say, sitting on a barstool. I hope I’ve come closer this time.

Well, I’m biased. Seriously, though, Rick is stretching himself pretty thin these days, what with his efforts to get his life story on film, partnering with a documentarian, running a hair-import business and a tax prep operation and selling T-shirts. There’s more, but there’s only so much room on the Internet. How’s he making ends meet?
I find myself worrying about that, hoping he’s not tempted to take any shortcuts. I know, in the past, he has. Rick has the benefit of being a truly hard worker, a first-to-arrive, last-to-leave kind of guy. Plus, prison has taught him to live simply. I once heard him boast that he could eat for two days on $5—beans and rice at El Pollo Loco.

You’ve felt hoodwinked by Rick before when he was busted a third time for trafficking in cocaine. He’s clean now, as far as everyone knows, but do you find your BS meter going off at all when you think of his numerous pursuits?
My BS meters chirps and smokes around Rick. I’ve learned the hard way not to trust too much. But I’ve also learned that he has an unusual gift for making stuff happen. I assume that most of what he tells me is pie-in-the-sky, and yet completely plausible at the same time.

The tricky thing about Rick is that he seems easy—and dangerous—to like. He’s all over the place, but do you find him to be a clear thinker?
I’m not sure I get what you mean by “clear.” Is he realistic? No. But realistic people are often people who are fearful or who have been hobbled by disappointment. Optimists tend to overestimate their own powers—and they’re often happier and more successful because of it. Rick gets that as clearly as anyone I’ve known.

Speaking of clear thinking: Morning, evening—what’s your best time in terms of mental clarity when you’re writing?
I’m a total morning person, though I often wish I weren’t. The slate’s clean before sunrise. Even when I’ve got cobwebs, my mind is still uncluttered at that hour. I’ve never written a decent sentence after 5 p.m.

Couldn’t, shouldn’t, wouldn’t—this is a little inside baseball, but you don’t use contractions in your writing. How did that come about, and why?
I can’t answer that. I won’t. Don’t make me.

You’re a writer who reports his pieces so thoroughly, there’s a solidity of information that sort of has a momentum all its own. How do you avoid the kitchen-sink effect on the one hand—pouring so many elements into a story that the narrative is lost—and omitting key information?
You must have forgotten my first draft already. Rick presents a special challenge: He’s had four or five different incarnations, spread across multiple decades. It’s easy to latch onto one thread and have the entire tapestry unravel. In his case, I kept coming back to that life sentence, life without the possibility of parole. The thing that was meant to crush him couldn’t.

To read “Freeway Rick is Dreaming,” Jesse Katz’s June profile of Rick Ross, pick up a copy of the magazine on newsstands or subscribe NOW.