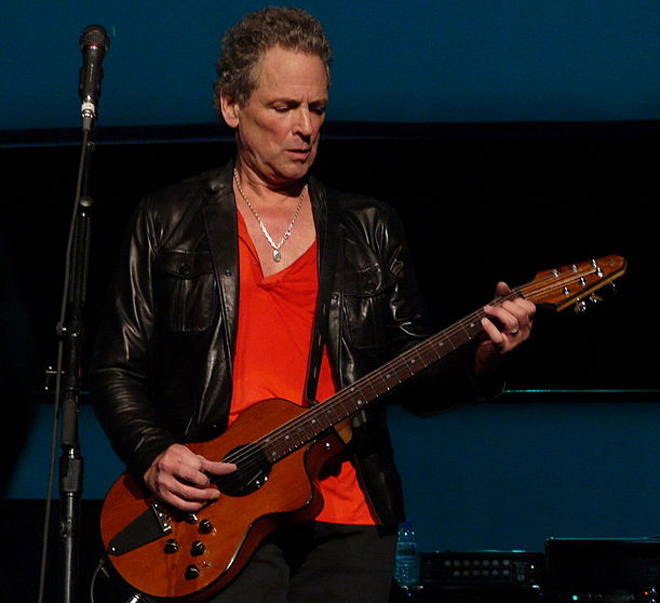 Most people probably think of Lindsey Buckingham, whom I interviewed for the magazine’s June L.A. Story column, as the guitarist for Fleetwood Mac, but he’s always been creating and recording songs—with and without them. When I finished the first draft of this list, intended to celebrate the music behind the man, it included more than 60 songs from Fleetwood Mac albums, solo albums, and soundtracks. Editors suggested I narrow it down. (You know how editors are.)  So here are 24 chances—organized into the categories of Buckingham Nicks, Fleetwood Mac, Solo Records, Soundtracks, and Popular Culture—for you to check out the musicianship of Lindsey Buckingham.

We are going to start with Buckingham Nicks, the album Lindsey and Stevie recorded as a duo in 1973. A track on this album was played for Mick Fleetwood at Sound City recording studio as an example of the studio’s work.  Some time later, when Fleetwood Mac’s guitarist Bob Welch quit the band, Mick remembered the guitar playing from the song and contacted Lindsey to ask if he would like to take Welch’s place. Lindsey famously replied that he and Stevie were a package deal. Mick—just as famously—said OK.

This is the song that first introduced Lindsey’s guitar playing to future band mate Mick Fleetwood.

Without You, Buckingham Nicks

A lost song slated for a possible second Buckingham Nicks album, it was rediscovered on YouTube and Fleetwood Mac play it on their current tour. Here’s a link to an old demo of it. Fleetwood Mac recently recorded it again, so it’s cool to compare the “before and after” versions. Their voices still sound great together on the current take, available on the 2013 EP Extended Play.

We are now going to skip over anything from the albums Fleetwood Mac or Rumours, because everyone knows those songs. The band followed these monster hits with the double album Tusk, which marked a departure from the their previous sound and was one of the costliest productions in music history. Now considered one of the group’s finest albums, Tusk alienated mainstream radio when it was first released.

These three are quintessential Lindsey songs from the album, signaling experimental styles to come on future solo efforts as he started to get excited by punk and new wave.

Like the band’s earliest songs, this is a pretty, more collaborative Fleetwood Mac groove.

This song starts out one way— with a mellow harp-sounding guitar— and then a takes off with a cool percussive groove for the refrain with a signature wailing guitar solo by Buckingham.

Say Goodbye, Say You Will

This is an emotional song Buckingham had written about and to Stevie Nicks much earlier, but he said it had to wait. In this poignant video he looks her in the eye and sings it right to her.

What started with Tusk was a move towards a solitary production style by Lindsey—less band/collaborative—where he plays all the instruments himself (even recording early vocals in his bathroom). These solo albums continue to showcase his talent as a guitar player and relevance as a songwriter; he certainly will not be only remembered as a member of Fleetwood Mac.

His first single as a solo artist, it reached #9 on the U.S. charts.

Love From Here, Love From There, Law and Order

A catchy, almost Americana kind of ditty with layers of multiple stringed instruments including electric, baritone, and acoustic guitars, bass, ukulele and percussion, all played by Buckingham.

This is from Lindsey’s ‘80s new wave era—not my favorite period—but the song is pretty catchy. The video is dated in a pretty funny way, as well.

Don’t Look Down, Out of the Cradle

This is the opening track of an album that is worth owning just for the fingerpicking classical guitar instrumentals that Buckingham plays between songs. After this album, he toured as a solo artist for the first time with a band that included an army of seven other guitarists.

It Was You, Under The Skin

This is an homage to his wife and kids that calls each of their three children by name.

Shut Us Down, Under The Skin

A beautiful example of Buckingham’s fingerpicking style of playing guitar, here is a video of him playing it on The Ellen DeGeneres Show.

Two Songs From Gift of Screws

There’s not a bad song on this album, and in addition to the ones listed in the printed piece, give a listen to these two upbeat rockers. (Place to fade or twist of fate? You tell me.)

End of Time, Seeds We Sow

Besides having a beautiful melody, this song shows how the distinctiveness and strength of Buckingham’s voice has not diminished over time.

What could be wrong with Fleetwood Mac harmonies on a Beach Boys song? This song was recorded at the Santa Monica Civic Auditorium for crew and friends.

Here’s an upbeat roots rocker from the Buckingham Nicks album played during the Tusk tour.

I’m So Afraid, The Dance

This song was written for a possible second Buckingham Nicks album; it appeared on the eponymous Fleetwood Mac and was often played as their epic concert finale.

Show You How, Live at the Bass Performance Hall

Eyes of the World

This fun to watch Mirage tour video sure makes you miss Christine McVie.

Buckingham has contributed to numerous film soundtracks over the past 30 years. This was his first and most successful.

His most recent contribution to a soundtrack features Norah Jones.

Lindsey Buckingham has been portrayed by Bill Hader in a recurring sketch on NBC’s Saturday Night Live entitled “What Up With That.” He appeared as himself during the sketch on the May 14, 2011 broadcast.

For input on this list, I have to offer many thanks to my friend Michael Adley, who was the first person I knew to insist that Tusk was a better album than Rumours. Though sacrilegious when I first heard it and Rumours will always resonate most strongly in my memories, I have to say it; he was right.

Stevie Nicks Made History on Friday. Let Us Celebrate Her Glory