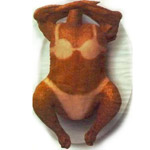 In our November issue, Los Angeles magazine’s Seen Queen Kari Mozena gave a list of people and things she’s thankful for in this year’s worth of intrepid party coverage. (From valets who re-start her crappy car to red carpet quote machine Viola Davis.) Here’s a list of other things our staffers are thankful for…

…that we don’t have to fly out of LAX today. Great timing, strikers! (Though we guess that’s the point.)

…that mortgage rates have hit an all-time low of 3.31%. Now if only everything wasn’t a cash sale with multiple bids.

…that not every celebrity is like Jason Statham, who made fun of Seen Queen Kari Mozena’s Dodge Neon in a valet line. At least she didn’t make Transporter 3.

… that a co-worker brought in pumpkin pie still warm from the oven this morning.

…that the Twilight series is finally over.

…that David Beckham provided us with six years of eye candy—uhh, we mean, increased visibility for the LA Galaxy. And if his departure results in that sourpuss Victoria Beckham taking the next steamer to Hertfordshire, an extra helping of thanks!

…that we can finally procure our favorite “everyday” snack foods via ATM, like $4 red velvet cupcakes and caviar. Now, all we need is that white truffle vending machine. Did we miss the memo saying these were the last days of Rome?

…that it will be perfect hiking weather Thanksgiving weekend. Again.

…that Cyber Monday is the new Black Friday, so we can shop and save in PJs while pigging out on leftovers.

…that we’re working on such a kick-ass January issue. We know we say it every month, but this one’s gonna be good!

…that Proposition 30 passed, giving the state’s public schools a fighting chance to hold steady, if not improve. (That Barbara Kruger “support our schools now or the entire world will go to hell” ad campaign? Thankful for that, too.)

…that each year brings more vegetarian (and vegan) dining options to the holiday table, helping some of us erase the memories of Thanksgiving dinners that consisted of steamed vegetables and canned cranberry sauce.

…that we didn’t star in St. Elmo’s Fire, because we stumbled on it on VH1Classics last night and wondered, did 1985 really look that awful? When Emilio Estevez suggests at the end, “Let’s go to Houlihan’s!” we thought we’d spit out our New Coke.

…that the Arclight is open on Thanksgiving Day for pre-awards season movie binging.

…that this blog and the new and entirely wonderful LAmag.com launched this week. OK, that was self-serving, but we are thankful to you for showing up to read it.

Have a great Thanksgiving.