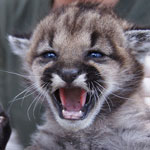 The magazine has been kicking around the idea of doing a mountain lions story for some time. But we didn’t act on it until you brought up the topic to us. What got you thinking about mountain lions?
P22—the mountain lion that was discovered in Griffith Park in early 2012. Of course, he was an uncollared male of unknown origins at the time he was caught on a wildlife camera. I was just astonished at how a huge predator like that could get across the city and into this park. I mean, how did it know where to go? What was its route? As it turned out, DNA tests showed that he was born in the Santa Monica Mountains. That means he had to have traversed the Mulholland corridor. Can you believe that!?

It’s hard to, given how crowded the city seems. You masterfully trace his progress into the park at the start of the story. I remember being startled when I read a draft by just how large a male cougar’s range is.
I know. P1, the first lion in the study, basically ruled the Santa Monica Mountains, which are about 250 square miles. He killed or mated with just about any cat in his path.

Because males just aren’t good at sharing. How about females—can they get along better than the guys?
It seems that way. Most lion-on-lion killings are perpetrated by the males. The females raise their kittens and can lie low. They don’t have to be macho and mark their territory to keep the competition away.

Did you have any idea before digging in to the story just how big a factor freeways play in the local wildlife—the way they essentially corral the animals that are too afraid (or too smart) to try crossing them?
Only to a point. I mean, I’ve always known that freeways and big roads are obstacles for wildlife. But I never realized what that meant besides the danger of being plowed down by a semi. The real danger is that freeways—like you say—confine the animals. That leads to incest and the possibility of health problems that threaten the species. What’s amazing is that if there’s safe crossing, a lion will find it. Just look at P22.

Then again, right as the magazine went to the printer, a lion had been struck and killed along the 101 freeway by Liberty Canyon. Liberty Canyon comes up in the story, because it’s an area in Agoura Hills where wildlife advocates have been trying to create a wildlife corridor under the freeway for animals to use. Why there?
The stretch of open space on the north side of the 101 between the Liberty Canyon and Cheseboro Canyon exits is essentially the only sizable swatch of land that serves as a gateway from the Santa Monica Mountains to the Simi Hills and beyond. Unless a lion is really bold or confused or just lost, it’s more than likely going to see the stretch of land between Liberty and Cheseboro and try to cross the freeway to get to it. If all goes well, it’ll use the underpass at Liberty Canyon. Sadly, it didn’t work out that way for the lion last week.

The piece focuses in part on Jeff Sikich, a wildlife biologist with the National Park Service who is studying urban carnivores. He’s a specialist at trapping with a pretty extensive track record (sorry—I had to).
Jeff is such a pro. He’s caught hundreds of big cats.

So in many ways, he sounds like a hunter. Just one who doesn’t kill his quarry. Or does he ever?
He’s never had to harm a cat as far as I know. As for being a hunter, I think it’s important to know that Jeff isn’t some loudmouth redneck. He has a real reverence and respect for these animals. He traps them in order to observe them. And if he’s lucky, his work as a trapper will actually help liberate the animals. To help them survive as a species.

He’ll use deer in the cage traps. Does he kill them?
Actually, he doesn’t kill the deer. At least not here in his study area. To capture an uncollared lion, he’ll use scents and recorded sounds of a deer in distress. That’ll draw the lion out. Once the cat is collared, he’ll hike in on a deer kill when the lion isn’t there and drag it into a cage.

Because deer, as you note, are the meal of choice for the cats, though cougars are not going to turn down a coyote or raccoon that come its way. But people are almost never on the menu. Why is that?
In more than a hundred years, there have been fewer than 20 attacks on humans in California. Only six of those resulted in death. You have a better chance of being killed by a pet dog. Literally.

Which is partly why they got the nickname “ghost cat.”
They’re ninjas. A deer never sees it coming. Or if it does, it’s already too late. They hide in trees. They know which surface makes the least noise when they walk on it. They drag their prey into the bushes and hide it. They kill and disappear, like Jason Bourne. Or Navy SEALs.

There’s a point in the story where you know, based on the information being transmitted by a cat’s radio collar, that you’re within a few hundred yards of a cougar. But you never see it—or any other cougar in the wild, despite some near-misses. Does wonder ever give way to frustration for you as a reporter?
I must say, I went into this story hoping—and semi-expecting—to see a cat. Not by chance, or even while tracking. I thought I’d get to witness a capture, but the timing never worked out. As you know, we waited a long time for this to happen, but eventually I had to give up. Funny thing is, I’m fine with it. What’s not there is what’s so fascinating. There’s some evidence, but few will see the smoking gun.

Godzilla versus Mothra. The ghost cat versus a black bear. Which is the more badass apex predator in our local mountains?
Mountains lions, hands-down. As a Fish and Wildlife agent told me, the bears here in SoCal are “pigs in fur coats.” Scavengers. Lions are quicker, quieter, far more badass. All they have to do is clamp down on the neck for long enough to pierce a windpipe. And that’s that. A lion on a bear is like one of those crazed UFC fighters attacking someone in a wheelchair.

Watching footage of mountain lions, it’s pretty amazing how easily they can drag a large deer. It’s like a big Kong toy.
Seriously. My terrier-chihuahua mix has a harder time jumping onto the couch with his rope toy.

You’ve gone bushwhacking in the local mountains for this magazine a couple times before. There was your story “What Happened to Mitrice Richardson,” which was nominated for a National Magazine Award. And recently, you wrote about marijuana growers. Any revelations about the city or its wilds during that time?
Yes. There are a lot of places in our mountains and canyons for humans and animals to hide and disappear and commit crimes. And they do. There’s so much wilderness in this city, so much terrain. I’ve come across pot farms, old washing machines, rusted-out cars, abandoned homeless encampments. And it’s not just me. Jeff Sikich and others I met see the same things.

Actually, a lot of your stories involve navigating tricky terrain, metaphorical or otherwise. Along with chasing those pot growers and trying to solve the mystery of Richardson’s death, you’ve written about pedaling through Vietnam and folks who’ve been sickened by radiation from the munitions they manufactured—another National Magazine nominee. What attracts you to a given topic?
In most cases, tension. When there’s an impending sense of doom, or when I just can’t stop asking questions—that’s when I know I have a story. Mitrice’s story was like that. It consumed me. I had to know—or at least try to know—what happened or didn’t happen. Sometimes anger attracts me, like with the nuke workers; the more I learned, the more I felt their stories needed to be heard. But sometimes it’s just the “wow” factor, like with cougars. Lions in L.A. is hard to resist. Even without a narrative or protagonist or antagonist etc., there will be anecdotes and scenes and history and big questions that serve as building blocks. As you know, putting those blocks in the right place isn’t always easy. Pedaling through Vietnam was just a fluke. That assignment came to me. What was I gonna do, stay home?

So now that you’ve reported this piece, has your thinking changed about being in the local wilderness?
Well, like I said, I won’t do any bushwhacking, at least not alone or without someone who knows the terrain and has a good reason to be there. I went on a mountain bike ride the other day out near the Simi Hills. I was very aware that I might have looked like a running deer. I whistled for most of my ride to let the cats know I was coming so they’d skedaddle. But frankly, I’m more concerned about bumping into pot farmers with guns than I am about getting attacked by a lion.

How about domestic cats—you look at them any different?
I’m fascinated by how much more housecats are like big, wild cats than most domestic dogs are like wolves. Cats stalk and jump four feet in the air to hunt critters. They’re always working an angle. What’s the saying? If you were to die in your home, your dog would cry and bark for help. Your cat would just eat you. Fortunately I’m allergic, so I won’t get to test that theory.

To read “Ghost Cat” pick up a copy of the November issue on newsstands or subscribe now.