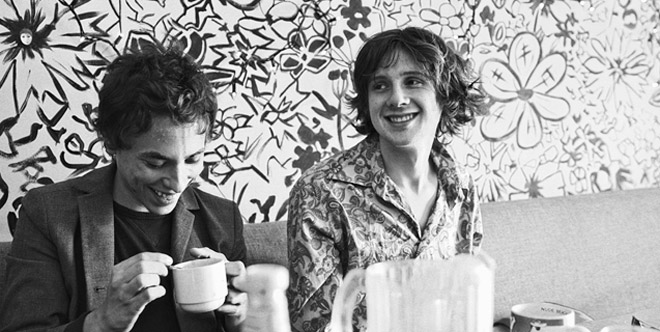 FRIDAY, March 29: FOXYGEN at the Echo
I sought out this band at the Echo Park Rising music festival last summer the way I would a bottle of wine at Greenblatts Deli. I didn’t know much about ‘em, but I liked the name—FOXYGEN—and I trusted their terroir. The 1960s-70s rock sounds churned out by L.A.-bred duo Sam France and Jonathan Rado have been likened to the Rolling Stones, The Kinks (I definitely sense a few winks with their riffs), and the Velvet Underground (ditto). But for me, what clinched it were two songs: “Oh Yeah,” which features what HAS to be a nod to Serge Gainsbourg, and the wry lyrics hidden in the otherwise lilting song “San Francisco,” which is enjoying heavy play on KCRW. Tickets to this show sold out pretty quickly, but it’s sometimes worth taking a chance and showing up at the Echo for any stray passes. Show starts at 8:30. See you there.

Saturday, March 30: SILVER LAKE FARMER’S MARKET
Inspired by a story about going car-free in our April issue, I’ve made a pledge to walk any distance that’s two miles or less from my house. What that means is I’ll be hoofing the 1.3 miles to the Silver Lake market on Saturday instead of driving to the Hollywood one on Sunday. It makes sense—but I got locked into the routine of driving to the Hollywood market, one I’m officially going to break this Saturday.

Sunday: March 31: THE HART AND THE HUNTER
I recently ran into Lindy & Grundy co-owner Amelia Posada at the Roosevelt Hotel. (She’s part of an all-butcher bowling team—who knew?) She was raving about the brunch at the relatively new Palihotel eatery on Melrose just east of Fairfax. Our dine editor Lesley Bargar Suter weighed in on their dinner menu, but I didn’t know a whole lot about their brunch, so I’m heading there as an Easter Sunday destination—a nice way to cap off a keep-it-local weekend.