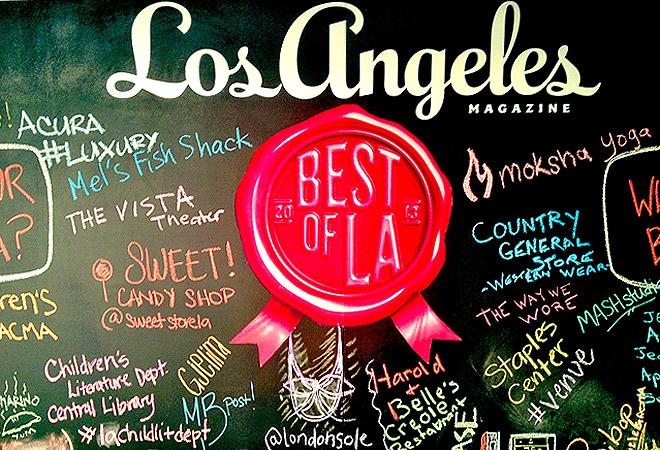 Everyone loves a winner. What’s more, everyone loves a party. Last night we combined the two for our annual “Best Of L.A.” soiree at Smog Shoppe in Culver City, where we recognized the crop of business owners, industry professionals, and experts named the city’s best in our August issue on newsstands now.

Guests and staff mingled in the open-air space, taking advantage of colorful cocktails, tiny hors d’oeuvres, and a digital photo booth. Midway through the evening, editor-in-chief Mary Melton welcomed and congratulated all of the champs, including Rick Standoff (whose Country General Store in Van Nuys took the prize for Best Western Wear). The cosmopolitan cowboy was thrilled. “I’ve worked extremely hard to keep my industry alive in a metropolitan city,” he said, “and I’m blown away by being here tonight.”

Lesley Logan, an instructor who won in the category of Best Mat Pilates, shared a similar sentiment. “I was in Whole Foods when someone called to tell me I had won,” she said. “I literally had to sit down and take it in. I try each day to be true to both myself and my work, and having that acknowledged in this way is a huge honor.”

The party ended late last night, but our celebration of this year’s Best of LA issue isn’t over yet: Enter now for the chance to win prizes from three of this year’s titleholders.