Home Uncategorized Show Us The Money: How Our April Cover Came To Be 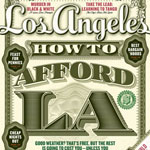 When we dreamt up the idea for this month’s pecuniary cover art, we had no idea how bearish the task would be. Enter Danny Pelavin, illustrator and typographer extraordinaire, who turned our vision into a reality. He tells us here how he managed to mint our April issue.

“The border and rosette guillochés were done in Excentro, a program developed by Russian designers around the time of the breakup of the Soviet Union. Its purpose was to provide emerging jurisdictions with the tools to create new currency. The logo was styled with Illustrator’s appearance palette and 3D effect, and it sits upon a hatched outer glow created in a program called Alpha Engraver (which turns tone art into engraved lines). The rest of the cover was done using Adobe Illustrator based upon hand-drawn rough sketches.”

“The typography consists of hand-drawn characters embellished to match typical currency styles. Background patterns, flourishes, leaves and other decorative elements are made up of pattern tiles, brushes, blends and other Illustrator tools and effects.”