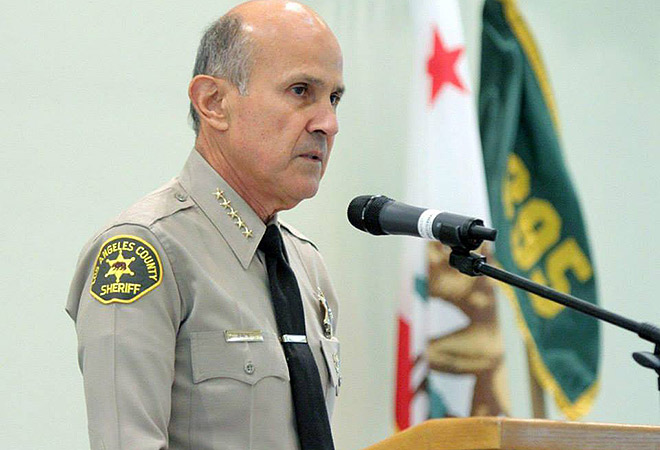 Sheriff Lee Baca had been in office 15 years when, in the face of mounting scandals, he abruptly retired in January. In the March issue of Los Angeles (on newsstands now), writer Celeste Fremon plunges deep into the jaw-dropping circumstances that preceded his departure as the nation’s most powerful sheriff. Fremon’s editor, Matthew Segal, talks with her about the Los Angeles Sheriff’s Department and her story, “Downfall.”

When you began the assignment for this story a year ago, Baca was still very much in office. He had every intention of running for sheriff again and looked like a shoo-in to win in June. But he “retired” a month before we went to press and not long after the US Attorney’s office delivered a multicounty indictment against the Los Angeles Sheriff’s Department. As far as LASD critics may be concerned, problem solved, right? So why do you think the story is still necessary?
Mainly because I believe the story is far from over. The FBI is looking at a number of new areas of alleged corruption that fall well outside the problems in the jails. And, although Lee Baca is has yanked himself from the LASD’s helm, his controversial second in command, Paul Tanaka, is running for sheriff. But no matter who is elected next November, for real reform to take place, the new sheriff will need to have a clear-eyed view of the dysfunction that still plagues this department. I hope this story can provide a bit of that perspective.

You liked what you saw in Lee Baca, at least early on. He was progressive, had a PhD, and spoke with passion.
I still like a great deal of what the former sheriff has to say. That’s what has been so perplexing about reporting on him. If he were a college professor, I’d recommend that students take his classes. Yet once I began to seriously investigate the department that he’s led for the past fifteen years, what I found couldn’t help but greatly change my understanding of the man in charge.

As scandals mounted, Baca claimed to be unaware of what was happening beneath him. Some people said his head was in the clouds. If you were to speculate, would you say he was simply unaware, willfully ignorant, or actually somewhat cognizant of the culture of violence and corruption that evolved within the LASD?
I’ve batted around variations on that question with so many people inside and outside the department. In the end, I guess the best I can say is that Baca has a truly complex psychology. For one thing, he’s a champion compartmentalizer. He really means all the compassion-driven things he says, and yet that message doesn’t square at all with some of his actions, which doesn’t appear, at least on the surface, to be bothersome to him.

Certainly a part of the problem has been willful ignorance. He would often say to people—both his subordinates and close professional friends—“I don’t want to hear the bad news.” As a consequence, those below him began filtering what they told the boss. But there is also a more aggressive side to the former sheriff’s denial of inconvenient truths. Unlike, say, former LAPD Chief Bill Bratton, who surrounded himself with people who would challenge him, too often Baca tended to shut out those who didn’t reinforce his views.

Official investigations as well as your own have pointed to former undersheriff Paul Tanaka as being somebody who instilled an ethos that was, at the least, very much in accord with the jailhouse beatings that led to some of the indictments against the department. How could Baca, whose style was so markedly different, not be aware of Tanaka’s M.O.?
Another puzzling issue. In some cases Sheriff Baca seemed to simply choose to believe Tanaka over the former undersheriff’s critics, even when documents and other on-the-ground facts were available to act as a tiebreaker. Also, there are things Baca has said that lead me to believe that he liked having a bad cop by his side as a counterpoint to his good cop.

You wrote G-Dog and the Homeboys, a book on Father Greg Boyle, founder of Homeboy bakery and a singular voice when it comes to turning the lives of gangsters around. Of course, a lot of gang members have gone through the jails that are run by the sheriff’s department. How did your experience with Boyle affect the way you report on law enforcement?
It’s made a huge difference. Because cops tend to see the worst of human nature in the course of their work, a certain percentage start to view lawbreakers as somehow less than human. It’s a short step from there to the kind of anything-goes policing that has led to federal indictments for the sheriff’s department and to a consent decree for the LAPD. When I question officers on such attitudes, they typically try to dismiss me as a liberal Westside white lady who doesn’t get it, which simply won’t wash with me.

In the course of more than two decades of reporting on gang members and their families, I’ve been shot at twice and have attended the funerals of around 30 young men and women, each of whom I knew and cared about. I’ve also gotten to watch close up as former gang members wrenched the trajectories of their lives away from the tragic direction that their pasts had predicted. In 20 years, I can honestly say that the miracles have outweighed the tragedies. So, when I encounter an officer who comes at me aggressively about these sorts of issues, sometimes there are momentarily bad-tempered exchanges. In most cases, however, the clash eventually has a barrier breaking effect, and my reporting benefits.

Your story is a wonderful read. The reporting is stellar, and the piece itself embodies what long-form journalism is all about—the craft of storytelling. Can you think of a few writers who inspire you or who inspired you in the past?
Oh, I’m a longtime Joan Didion fanatic. I also love George Orwell’s nonfiction and such works as Tom Wolfe’s stupendously good The Right Stuff, about the early years of America’s space program. More recently, I’ve been inspired by Katherine Boo’s Behind the Beautiful Forevers, Dave Eggers’ Zeitoun, Tom Bissell’s The Father of All Things, and Michael Lewis’ The Big Short, which I read twice and didn’t want it to end either time.

I actually just got to Beautiful Forevers. Such great book, the mix of the literary and the gut-wrenchingly reportorial. Anyway, aside from delivering a well-written, impeccably reported piece, what do you see as your role?
Ideally, with a piece like this one, a part of my role is to give readers enough information on a topic that they can draw their own conclusions and then push for what they believe to be effective public policy and/or reform. To put it another way, at heart I’m a storyteller, so I try to use narrative tools to lure everyone into being as intrigued by the issue as I am.

Which gets us back to Baca: You report on some fairly shocking goings-on within the department. You’re a veteran at reporting on law enforcement. It’s not an easy culture to crack, is it?
Well, like members of any subculture, those in law enforcement can be suspicious of outsiders. But on a purely human level, cops love to talk to people who genuinely want to hear their stories. With regard to the sheriff’s department, there has been an unusual added dynamic, which is the fact that so many LASD people have reached out to me directly, rather than waiting for me to pound on their doors. Every week, I’d get these emails that almost always began with something of this nature: “I never thought I’d talk to a reporter, but I can’t stay quiet any longer….”

The LAPD and LASD each have more than 9,000 officers. So, lots of personalities, lots of different qualities among the ranks. That said, if I were to put a stereotypical LAPD officer beside a stereotypical LASD officer—I know, I shouldn’t stereotype—would I notice a difference beyond the uniforms?
In general, I think Los Angeles law enforcement is Los Angeles law enforcement, with all its unique challenges. The main difference right now between the LAPD and the LASD is in the nature of the dysfunction affecting the sheriff’s department. An LAPD lieutenant once said to me a few years after the Rampart scandal, “Historically, we might beat you up, but we won’t take your wallet.” It was funny, but he also meant it. Unfortunately, the LASD’s problems feature beating people up along with a far more complicated kind of corruption having to do with things like the pay-to-play allegations, and reports of out-and-out fiscal malfeasance.

From the folks you’ve spoken to, do you get the sense that there’s some relief among the rank-and-file that these opposing forces of Baca and Tanaka are out of the department?
The relief has been startling. And it has continued under the new interim sheriff, John Scott, who in one of his first official acts after his swearing in, shut down the infamous cigar smoking patio—

The one in your story that Tanaka uses as an exclusive clubhouse of sorts.
Right. In the future it’s to be renamed and made available to all those who work at department headquarters. Interestingly, Scott’s office also announced—rather wryly, I thought—that there would be no smoking in the former cigar-smoking patio, as per state law.

Of course, Tanaka’s still running for sheriff. Is Baca playing much of a role on anyone’s behalf in the run-up to the June election?
Baca has endorsed his two of the assistant sheriff’s who are now running: Todd Rogers and Jim Hellmold. The rumor is that he is helping one or both of them to raise money, but that’s as yet unconfirmed.

To read “Downfall,” pick up a copy of the March issue on newsstands or subscribe now