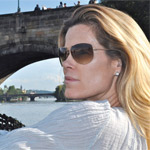 For years Suzanne Rico was the morning anchor at CBS2. Then in 2010, she abruptly got fired. Instead of moping around, licking her wounds, she and her husband sold their cars, rented out their house, and traveled around the world with their two young sons. The experience changed her and her relationship to her family, her work, and herself. In the November issue of Los Angeles, she writes about the odyssey and how it still reverberates through her life in “The Road Taken.” Here she talks with editor-at-large Amy Wallace about how the story came to be:

Had you done much writing before you went on this trip?
I hadn’t. I’d written one piece for the L.A. Times. I enjoyed it so much, but it took me so much time, and I was basically learning on the job while raising two kids and carrying a full load at work. But when I decided to go on this trip, people started saying to me, “I can’t believe you’re going to do this! You need to keep us up to speed!” So I started this e-mail list, and I’d just send stories of what we were doing. And after the third or fourth story, I had such incredible response and people were sending them to friends and people were asking if they could get on my e-mail list. So finally a close friend of mine, Lisa Joyner, said, “I’m setting you up a blog.” I said, “A blog?” She set it up for me. She picked the name: Walking Papers.

So suddenly you were a blogger.
Yes, I was an unpaid blogger trying to blog from places like the wilds of Turkey and Namibia and the Ruta 40 in Argentina. Let me tell you how difficult it is to upload a blog from some of these places. It’s damn near impossible. You could do it faster by carrier pigeon.  I don’t think that made me a very good blogger. I would blog once a week or once every ten days. Whenever I could get to an Internet connection.

There’s a scene in the story when your computer goes dead after one of your sons delivers it a swift kick. In addition to everything else, technology was not always your friend on this journey.
One time we were in Namibia, and we drove 300 kilometers over what was supposed to be a paved road. It had rained, and there were rivers going across the road, so 300 kilometers took us 10 or 11 hours. Where we were going was said to be the one Internet outpost in the middle of nowhere. But when we finally got there, they said, “Well, we don’t have Wi-Fi, but you can drive 50 kilometers to a gas station, and they have it.” So the next day we drove there, to a little solar-powered hut in the back of this gas station. I went in, but they were only set up for PCs, and my computer was a Mac. There was no way I was ever going to send a blog post from there.  Here I was driving my family around Namibia trying to upload a blog. And at some point I just had to say, OK, I can’t do it, and it’s just going to have to happen when it happens.

That’s right: patience.
Exactly. Which is kind of the whole theme of my story: not to apply that “I must do this NOW!” thing and let it ruin your whole trip.

So when you did succeed at posting to your blog, what kind of feedback did you get?
Amazing. It’s always nice to hear positive feedback. But what made me happy is when I started to reach people I didn’t know. Having encouragement come all the way from Australia or England, with people saying, “Wow, I’m so proud of you. And the fact that you’ve jumped off this cliff makes me feel like I can, too.”  That was immensely rewarding. It validated what I was doing and made me feel that even in the outer reaches at the end of the world, I wasn’t alone. There was camaraderie. People said, “This is inspirational” and “You’re so courageous.” And while I didn’t really feel courageous at all—I just kind of felt like I was putting one foot in front of the other and trying to learn along the way—I think people did get a sense of, If she can do it, I can do it, too. And not necessarily travel around the world but change your life.

So when you came home to L.A., what made you want to turn the blog into a longer piece?
It was kind of to prove that I could. In a lot of ways this is a totally new frontier for me. I’ve been in journalism my whole career, but I’ve never written stories, and I’ve certainly never told my own story. I’ve told other people’s stories my whole life. If you interview me and you tell my story, or if one of the talk shows wanted to talk to me about our trip, they’d put their spin on it. This was the only way I could really tell it from my perspective. It was so personal and it meant so much to me—what we did and being able to make a 180-degree turn in my life—that I felt compelled to share it. But I didn’t know if I could tell it in a way that would be meaningful to other people. I hope that it is and that somebody else sees themselves in me and says, “I don’t have to go around the world, but maybe I can try to find a more compelling career or make my marriage better or start treating my body in a way that makes my life more fulfilled or worthwhile”—or whatever their particular demon that they’re struggling with is. You really just have to do it by taking a step forward. And writing the story was a huge step forward for me.

The trip around the world opened a door, it sounds like, to a new way of expressing yourself.
Yes, and there was another thing that I didn’t address in the story that was important for me. When I got fired—and then on top of getting fired, I decided to leave the only business, the only career, I’ve ever known—I thought maybe it would be over for me. I thought no one would ever value my skills or my talents ever again. That’s a fear I think so many people have. And what I found was exactly the opposite: that all those years I spent honing a craft were worthwhile, and people saw the worth in me despite the fact that I no longer had that virtual name tag that says “Anchorwoman.” All the work I did over the years still had value to a lot of people, and when I came back to L.A., people still wanted my input. So the trip opened a lot of doors.

Somebody asked me the other day, How do you keep from slipping backward? It’s a really good question, and the answer is, I slip backward all the time. I find myself waxing and waning in how well I do with this new philosophy that I have about life, but every time I backslide, I find it easier and easier to catch myself. I make the necessary adjustments and get back on my path and start moving forward again.

Since you’ve returned, your mom—who plays an important role in the story: Your kids’ missing her is part of what brings you back to L.A.— has gotten a scary diagnosis.
Yes, when the person asked me about backsliding the other day, I told them, “I have a mom in the hospital who is fighting Stage IV cancer. If I needed any more of a reminder about what’s important in life than that, then I think I would be a big, fat failure.” But what are your core values? What is most important? Is it that I’m some rich, famous writer or journalist? No. It’s that my family thinks I’m a good person, and that I can help them and that I can be present for them. Especially in this time. Every day I’m reminded of that.

It’s as if you had to go very far away to remember how important quality time is with your family. Like you had to make a clean break to get in touch with that again.
That’s right.

I think a lot of people will relate to that.
Well, and I do wonder on an intuitive level: Did all that have to happen so I could be here for my mom? If I were working at CBS, and getting up at 3 in the morning, and trying to juggle all of that along with my mom’s illness, how present would I be for her? I wouldn’t be able to be. But now, every day, I say to myself, OK, I’m going to put running shoes on and my sweats, and I’m headed to the hospital. And if I can get a run in today, then that’s a bonus. It’s the greatest gift I’ve ever experienced, being able to hold her hand every step of the way. And saying, I will be here for you.