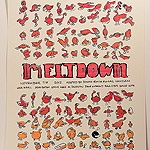 L.A.-based artist Dave Kloc has become somewhat of a local celebrity due in large part to his insanely cool creations. The original posters that he screen prints for Meltdown Comics’ on site comedy show, Nerdmelt, can only be described as sui generis; in fact, the audience has come to anticipate his work almost as much as the show’s celebrity line-up.

Kloc posts play-by-play photos of his artistic escapades on Instagram (@davekloc), which allows his followers to get a behind-the-scenes look at the process. As per usual, that wasn’t quite enough for us—we just had to know more about the guy who drew Ren & Stimpy as if they were made of human hands. Here we discover where his inspiration comes from, what makes his art unique, and exactly how tiresome it is to hand-draw 100 ducks.

I hate to state the obvious, but you are clearly very artistic. How did you become interested in drawing and later screen printing? Why those mediums?
Thank you! I strive to not be too clearly artistic. I have zero berets and I don’t smoke, so that’s half the battle. I have always been a doodler. My notebooks in school were mostly drawings with the occasional date and class name thrown in, as I had INTENDED to take notes that day. Screen printing came later, actually after art school (University of Michigan) when my love of collecting screen printed concert/gig posters turned the corner from hobby into way-of-life. Here in L.A., I helped out at the NOMAD Art Compound in Frogtown for over a year, where Damon Robinson kindly learned me in the ways of the flat arts.

Where do you find the majority of your inspiration stems from?
I would buy comic books in value packs from Sam’s Club and Costco as a kid (it was called Pace in Michigan, where I’m from). Between comic books, The Real Ghostbusters, and Calvin and Hobbes, that’s enough artistic influence to make anyone want to create.

How did you segue your passion for art into a business?
Starting in high school I was interested in drawing shirt designs for local bands’ shirts and show flyers. I was in bands in college and toured a good bit after i graduated as a tour manager and merch guy, but as I look back on all of it, it seems that it was all just networking as an illustrator to make more shirts, flyers, stickers, posters and albums.

How is it that you came to design posters for Meltdown?
My girlfriend Kate and I went to the second ever Meltdown show after it went from a monthly show to its current weekly schedule. We ended up going back every week, as it was always an amazing time (and at that time, they had free beer). I loved the vibe of the shows; they felt like a DIY punk show in someone’s house. A real “no parents” feel. I mentioned to one of the hosts, Jonah Ray, that the Meltdown really needed some show posters to complete the punk show experience, and he said “I agree – do you make posters?” It was at that moment that I decided: “Yes,” I said. “Yes I do.” And I’ve been designing and hand screen printing one poster per week for over two years now.

Can you give us a day-in-the-life of one of your prints? How long does it take to come up with an idea and then actually bring it to life?
The ideas come here and there. I try and sketch them out when they come to me, and then I wait for the weekly lineup [of comics] to be announced. Then it becomes a little clearer. I try and draw each poster over the weekend so I have time to clean it up and prepare the screens, paper, and ink at the shop for printing. After drawing, scanning, and separating the image into colors, I print out the image onto films so I can make screens with them. I then hand screen print (which is a fantastic/tedious/delightful/frustrating process that I encourage everyone/nobody to try) 30 posters each week. It all ends up taking about 12-18 hours of work.

Do you lend your creative talents to anyone else besides Meltdown?
I’ve always had a decently steady stream of band shirts and album art come through, but since I’ve been saturating the Meltdown show with artwork, I’ve met so many great comedians that have honored me with the opportunity to do their album art or posters: Kumail Nanjiani (I am working on his Comedy Central album, but I’ve done his artwork for a month-long festival he did in Edinburgh, Scotland), Lance Bangs, Dan Telfer, Baron Vaughn, Funny or Die, Comedy Bang Bang, Dana Gould, Jonah Ray, Kurt Braunohler–working with comedians and bands is as different as can be.

What would you say makes your art different than anyone else’s?
Hopefully not too much. Everyone else’s art is very nice, indeed. I’ve been lucky to be able to stay busy enough that I can try new techniques and forms of art for clients. And through practice I’ve been able to make my art far less creepy, which has taken years. “Creepy” is the only thing that comes naturally to me.

What’s your favorite Meltdown poster and why?
That’s pretty tough. For the 100th show I drew 100 ducks. 100 ducks. It was so much fun to draw and print. With a large blank page staring me in the face, starting to draw the first duck and have it take up 1/100th of the page–it was a very time consuming and utterly satisfying endeavor. There was a poster with a horse skeleton whose skin was made of interwoven human bodies; I was very into that one, as well.