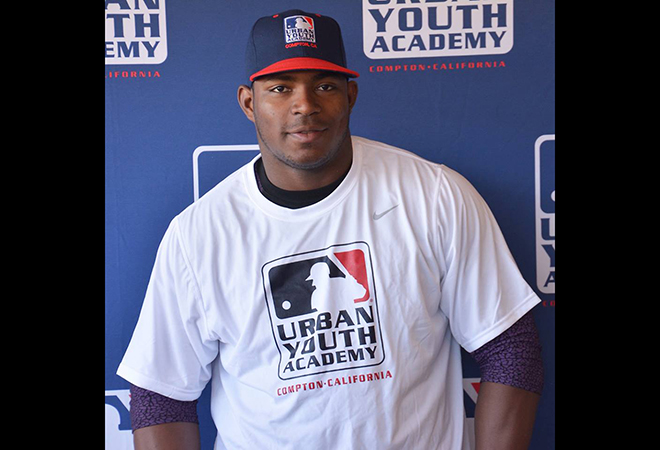 In the May issue of Los Angeles, contributing writer Jesse Katz tells the shocking story of Dodger outfielder Yasiel Puig’s escape from Cuba in order to play ball in the United States. Katz speaks with executive editor Matthew Segal about piece.

So Yasiel Puig was smuggled into Mexico and held by traffickers. Should I have given readers a spoiler alert?
If you follow the Dodgers at all, you’ve probably heard rumors that something mysterious and troublesome happened to Yasiel on his journey out of Cuba. So, the specter of danger, that’s been hinted at. But the details I came across—the names, the dollar figures, the very real threat of something horrendous occurring—I think that’ll be news to pretty much everyone.

When you and I first talked about your writing a piece on the Dodgers’ $42 million outfielder, I knew two things: You love baseball, and you would do great things with the story. But this story is much more than a profile, and it’s certainly not a “sports story.” How did an assignment for what initially seemed to be a pretty straightforward, 3,000-word piece transform into a probing, nearly 8,000-word epic?
C’mon, given my track record, you had to know I was going to write long! Really, what caused the story to mushroom, more than anything, was the trove of material I found while digging around in court records. I’d sort of resigned myself to the fact that the story of Yasiel’s escape was going to be unknowable—and yet I suddenly found myself looking at documents that presented an eyewitness account. I had to see where they led.

The Cuban government isn’t fond of its athletes defecting. What sort of apparatus does it have to dissuade people like Puig from leaving?
I’m hardly a Cuba basher, but it’s really disturbing to think of any society that forbids its people the basic freedom of leaving their own borders. As an athlete, Yasiel was held to an even higher standard—he was representing his country, playing for Fidel’s revolution. Trying to escape gets you kicked off the team, then banned from baseball, then probably jailed. There’s constant intrigue: traffickers doing their hustle, police snooping around.

It’s alleged that Puig played both sides in order to safeguard his own flight. In fact, that assertion is in part how this story came to be.
There’s a lawsuit, pending in Miami right now, that basically calls him a snitch. It was filed by a dude who ended up in a Cuban prison because Yasiel accused this guy of trying to get him to defect—and it’s sort of true; Yasiel’s testimony did put him in jail. But I also tried to put myself in Yasiel’s shoes and imagine what it would be like to want to defect but to not know how to pull it off without having it all blow up in your own face. You know, like, if you’re going to put your life in a smuggler’s hands, which one is actually going to deliver you to the promised land? Anyway, it was in that lawsuit that I found this wild document, an affidavit from a former Cuban boxer named Yunior Despaigne, who was on the boat with Yasiel. Yunior’s the guy who lays it all out, from the financial deal that got them out of Cuba to all the harrowing details of being held captive in Mexico.

Of course, it’d be easy to discount Despaigne’s assertions as being a case of sour grapes—his fellow escapee has attained fame, while the boxer’s fortunes are somewhat different.
Yeah, Yunior probably feels a little forsaken. He was the crucial go-between—his connections appear to have set Yasiel’s escape in motion—and then he endured a lot of the messy aftermath when the smugglers were demanding that Yasiel to pay up. But Yunior’s not a party to the lawsuit; he’s just a witness. He doesn’t have much to gain, really, from speaking out. He’s probably doing so at some peril, I’d have to imagine.

You describe his reluctance to speak with you—as well as your trepidation with knocking on his front door, unannounced. It’s the sort of scene a lot of readers may have witnessed in movies, the committed, or even pushy, reporter blind to rejection.
In 30 years of journalism, do you know how many doors I’ve had slammed on me? But I’ll say this: I’ve also had some doors unexpectedly swing open. You just never know until you try. And then when you’re rejected, maybe the difference between failure and success is as simple as just trying again. Is that pushy? I’m suspicious of any story that’s handed to you with a pretty bow. All the good ones require some degree of extraction; you have to go out and dig them up.

Now, the U.S. government won’t accept Cuban exiles if they’re caught at sea; they have to literally set foot in the States. But that’s not why Puig wound up being held by his smugglers in Mexico. Why go to Mexico first?
It was a strangely circuitous journey: Florida’s only 90 miles north of Cuba, yet he veered hundreds of miles to the south and east, to Mexico’s Yucatan Peninsula. It had nothing do with immigration and everything to do with the byzantine rules of Major League Baseball. If Yasiel had come straight to the U.S., he would have been treated as an amateur and forced to enter the draft. By going to a third country and supposedly gaining legal residency there, he could declare himself a free agent and negotiate with any and all teams. The difference was worth many millions, but it also meant detouring through a region of Mexico where smugglers and cartels and corrupt police kind of run the show.

While you were in Cuba, along with visiting the home of Despaigne’s mother, you went to Puig’s family’s house. What was it like?
Yasiel’s from sugarcane country, a very rural, almost antique corner of Cuba, more like 1880s than 1950s. To try to picture a kid growing up there, playing on these brokedown baseball diamonds—and then think of him as a multimillionaire, under the spotlight of fame and celebrity here in L.A., with all that adoration and scrutiny, it just doesn’t compute. One is so far removed from the other, I don’t even know if you can dream of it.

Puig, as you note, isn’t big on granting interviews, and you speculate a bit as to why.
I think Yasiel made a decision to come here under circumstances that were very complicated and risky but totally understandable—any of us, with his talent, would probably have done the same. And yet he’s not a politician or a spokesman for a cause. There’s this great collision of nations and ideologies that he had to traverse, with grave danger in between, and I think it’s fair to say he’s just a kid who wants to play baseball. That’s meant kind of erasing his past and shutting off anybody who wants to ask nosy questions.

Everyone at the Dodgers knew he was a gamble, more for his limited track record than for his personality. But then it became apparent what a free spirit he is. That can be dangerous for a handsome young athlete with a boatload of money and newfound freedom. What do you think when you ponder his future?
I don’t think even the haters doubt his talent. He’s just such an extraordinarily gifted athlete. But baseball is a game of habit and routine—and, as they say, of failure. If you’re going to survive a 162-game season, you can’t allow yourself to get too high or too low; you just have to keep grinding and repeating. Yasiel hasn’t really shown much steadiness yet, on or off the field. That’s part of the mystique, I suppose. He’s frickin’ exciting to watch. You just don’t want him to self-destruct.

You’ve written about baseball before for us; in fact you spun your story on being a Little League commissioner into The Opposite Field, a book that took you, in Katzian fashion, to the Pyrenees to retrace your mother’s flight from war-torn Paris. And you’ve written a couple of pieces critical of the Dodgers. This isn’t a Dodgers story, per se, but it’s not likely to make the front office jump with joy, either. And yet you’re a devoted Dodgers fan. Explain.
My mom came to New York on a boat as a little girl and grew up listening to the Brooklyn Dodgers on the radio. It’s part of what made her feel American. Jackie Robinson was her first hero. So, the Dodger gene kind of got handed down to me, but even if it hadn’t, anyone who loves a sports franchise is also keenly aware of its flaws. I’ve attended 16 consecutive home openers at Dodger Stadium—it’s sort of like my national day of observance—but if you’re emotionally invested, you’re going to groan as much as you cheer.