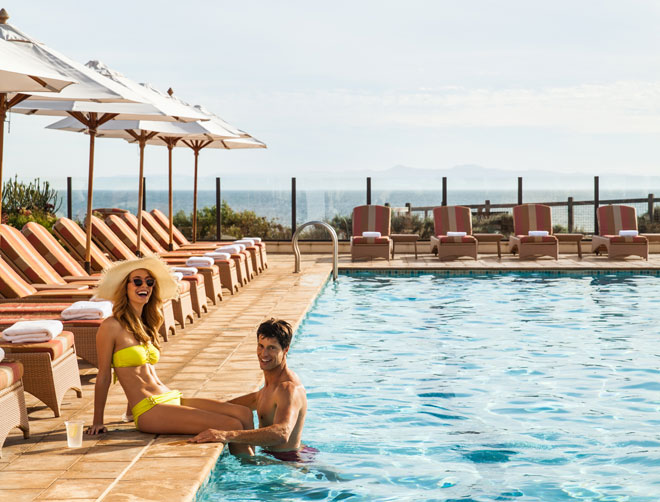 When art director Steve Banks revealed an early draft of our March cover, we had questions, like who is that male model? And is he single? Or, what does he do for fun? OK, so our questions were mostly about the cute guy seen jumping into the Terranea Resort pool. (Sadly, only his bottom half is visible in the photograph that was ultimately selected and appears on newsstands). Turns out Rib Hillis got his break in the early ‘90s. After heading to a modeling agency “just for fun,” he was cast for Milan’s Fashion Week. The 42-year-old actor-model moved to L.A. in 1996 and never looked back.

We have to ask: What’s your relationship status?
I’m married and my wife is pregnant. I also have 9-year-old twins who live in the O.C. with their mom.

What’s your ideal date?
My wife and I often have the same date: We go to Cheesecake Factory and go see a movie, especially now that she’s pregnant. Before that we would go to clubs in West Hollywood like The Abbey. Right now I can’t wine her, but I will dine her.

Where else have we seen you model?
I’ve worked with Target and Sears, and I’ve done commercials for Jenny Craig and Ford. I do high-fashion editorials for places like Beverly Hills Lifestyle Magazine—most of the work in L.A. is more catalogue. As a model, you do whatever they want you to do.

You were photographed for our March “10 Surprising Hometown Getaways” cover. What’s your perfect staycation?
I’d like to go to Santa Monica and stay at a boutique hotel. Maybe go to the boardwalk, walk the pier, wander around and end up at a place on the 3rd Street Promenade for dinner. Houston’s is one of my favorites.

Where can we expect to see you next?
There are a couple of things in the works: a major commercial I’m on hold for and negations to host a new home improvement show. If that happens it would be fantastic. I did Extreme Makeover: Home Edition for two years, so I have a lot of experience with that.