Home Media Press Room: An Inside Look at Truthdig.com 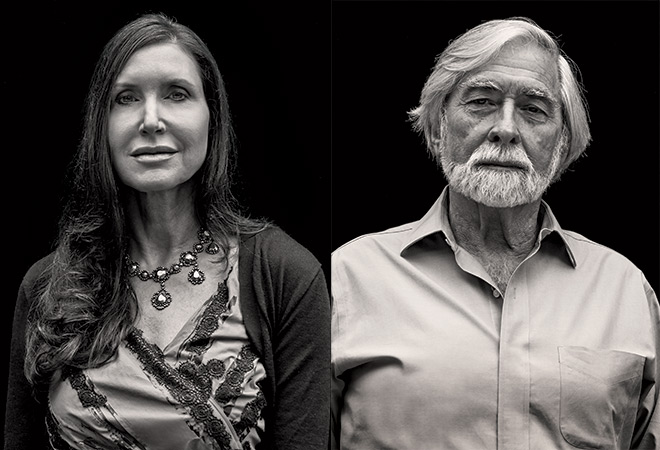 Ed Leibowitz, the author of “Can You Dig It? Yes, You Can,” a profile of the website Truthdig that appears in our February issue, answers some questions from his editor, Amy Wallace.

How did you get the idea to write this story?
I first met Truthdig’s publisher, Zuade Kaufman, several years ago, when I was researching a profile of billionaire philanthropist Eli Broad for Los Angeles. Her late father Donald Kaufman was Broad’s business partner. I knew Robert Scheer, Truthdig‘s editor in chief, through his commentary on KCRW’s Left Right & Center.

I rarely missed his columns for the Los Angeles Times. For my money his was the most compelling voice on that paper’s op-ed page, right or left. After Scheer was fired from the TImes, he launched Truthdig with Kaufman, and his column decamped there. I admired the way Truthdig under Scheer combined rigor, depth and left-leaning stridency. The site trounced competitors many times its size in the on-line awards sweepstakes. So I wanted to know more about how Scheer and Kaufman were pulling it off.

Were there any particular challenges that this story presented?
There’s a reason you haven’t seen an equivalent of All The President’s Men or The Front Page made about a website. Compared with the old media, Web news is severely challenged in the drama department. The editor-in-chief isn’t barking orders across a bustling newsroom floor, but is sending emails. Reporters celebrate scoops and suffer setbacks in home offices or cafes, far from their colleagues. And of course on the Web you’re never going to hear anyone shout “stop the presses.” While I had some early concerns that Truthdig might not carry a long-form magazine narrative, those fears dissipated because the place is filled with such strong personalities: Scheer, Kaufman and the site’s most popular columnist, former New York Times correspondent Chris Hedges.

You’ve written before about people in L.A.—Father Greg Boyle, for example—who give of themselves in the service of the greater good. Zuade Kaufman, Truthdig‘s publisher and benefactor, seems to be another one of these people. Does she see herself that way?
Kaufman is very idealistic. She was raised by her father to root for the underdog, and she has a love of risk that has threatened her personal safety more than a few times. She does see herself as advancing the public good and nurturing young journalists through Truthdig. By way of comparison, Eli Broad’s work on behalf of the causes he champions reflects a good deal of ego advancement as well as philanthropic commitment. Kaufman is more reticent. Her name doesn’t appear much on the site, and even frequent visitors to Truthdig would have no idea how much of her inheritance she’s poured into it.

As someone who works mostly in print, were you tempted by what you saw at Truthdig?
When I began researching this article, my view of Web journalism was that its impact was swift but not so long lasting, and that its content tended to be more traffic-driven than civics-driven. Also, as a rule, the Web pays journalists nothing or next to nothing. I did find Truthdig inspiring in that it actually pays its journalists, that it favors complexity and in-depth analysis, and that its contributors seem more preoccupied with Edward Snowden than Miley Cyrus.

Robert Scheer is something of a larger than life figure, as you portray. It’s interesting that his sons are following, if not in his footsteps exactly, at least in the same direction. How did their working relationship strike you?
There seemed to be a lot of love on both sides, and bemusement on the part of Peter Scheer, who is Truthdig’s managing editor. Peter didn’t want a career in journalism—he began in film. For him, signing on to Truthdig seemed more of a coming to terms with his father’s inevitability than anything else. Robert Scheer already had a firm journalistic hold on Peter when he was in high school. The elder Scheer has dyslexia, and he relied on Peter to proofread his columns, often keeping his son in the car during the morning drop off until he had made sure the latest Times column was error-free.

Scheer’s wife, Narda Zacchino, was a major editor at her husband’s paper—she launched the Los Angeles Times Festival of Books. Did you encounter her as well?
I did, at their Bunker Hill apartment, which has a prominent view of the old Times building out the window. Dominating their living room are several of the limited-edition Picasso prints she and Scheer managed to wangle out of the paper’s executive dining room when it was closed down. I had often wondered whether Scheer’s politics were farther to the left than Zacchino’s, assuming that someone sharing his political stance would be unlikely to reach the highest echelons of Times editorial leadership. But in our conversation she seemed much more politically progressive than I had imagined.

Years ago, my wife [Los Angeles editor-in-chief Mary Melton] wrote an article for the Times Sunday magazine about accompanying her then 65-year-old mother to get a hula girl tattooed on her leg. Inspired by Sailor Jerry, this hula girl danced topless, but the Times—being a family paper—balked. Mary was told that the photo of the tattoo that would appear alongside the article had been kicked upstairs for scrutiny. Since Zacchino supervised the magazine, among other sections, we always assumed that it was she who made the ruling to photoshop the lei to cover the hula girl’s breasts in the published version (which made the image more demure but inaccurate). When I got a vacationing Scheer on the phone in Hawaii, late in the reporting process, I thought it would be an appropriate moment to share this mini-saga with him. He put his wife on the phone immediately, and she insisted that the matter had never crossed her desk. If it had, she said, she wouldn’t have given such an order. Sounded convincing to me. My theory now is that the magazine’s editors decided against bothering the higher-ups, and censored the tattoo on their own.

To read “Can You Dig It? Yes You Can,” pick up a copy of the February issue on newsstands or subscribe now.