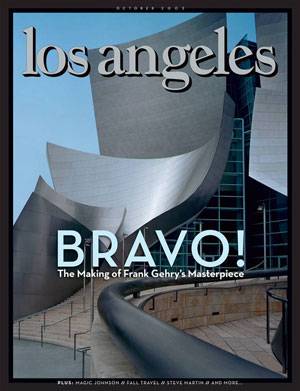 “Will its gleaming walls invite or merely impress?” That’s the question Los Angeles magazine posed alongside “How Disney Hall Redeemed Frank Gehry,” a cover story by Dave Gardetta about the L.A.-architect and his revolutionary new downtown music hall that ran in our October 2003 issue.

Exactly ten years since its opening, it’s easy to measure the landmark’s impact on the cultural landscape of Los Angeles. The iconic, 2,265-seat home of the Los Angeles Philharmonic has enjoyed praise from around the world, engendered civic pride, and inspired the look of a new generation of buildings here in L.A. A sold-out anniversary concert performed earlier this month celebrated the hall’s standard-bearing acoustics with a program that included pieces by Tchaikovsky and Mahler and even showed off with John Cage’s so-called silent piece, “4’33”.” When Gehry took the stage that night, the audience erupted into thunderous applause.

It was an experience he couldn’t have anticipated receiving before the hall’s debut on October 24, 2003. The project, which began with a seed grant of $50 million from Lillian Disney, took more than 15 turbulent years and an estimated $247 million to complete, a process that often left the development’s key players—Disney, businessman Eli Broad, Esa-Pekka Salonen, acoustician Yasuhisa Toyota, and Gehry—feeling insecure and at odds.

In his story, Gardetta details their frustrations, their visions, and their masterpiece, which immediately became a symbol of “L.A.’s marked idealism.” He also shares this prophetic exchange from the Los Angeles Philharmonic’s first private concert at the hall:

“It’s a grand day, isn’t it?” a woman in a peach suit asked businessman Eli Broad.

“It certainly is,” Broad answered.