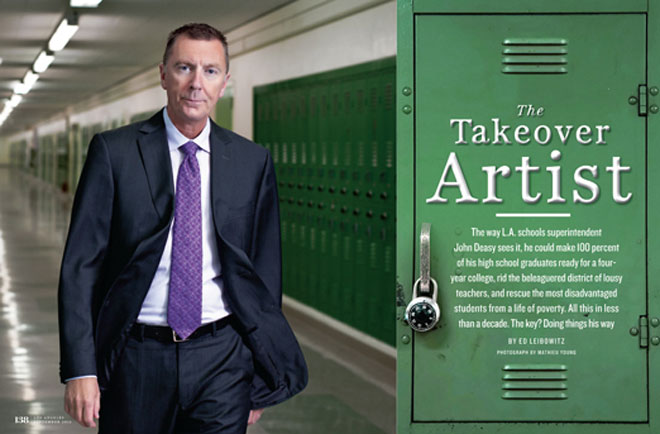 Days before the unofficial end of summer, Los Angeles magazine has a new reason to look forward to fall: “The Takeover Artist,” writer-at-large Ed Leibowitz’s September 2012 profile of LAUSD Superintendent John Deasy will be awarded the PEN Center USA Literary Award for Journalism on October 14 when the center, whose mission is “to foster a vital literary culture,” hosts its annual awards dinner in Beverly Hills. Author Joan Didion will receive a lifetime achievement prize at the event.

After his story was published, Leibowitz opened up about the experience of profiling Deasy—an assignment that required him to follow the superintendent for an entire school year—in a Q&A with Los Angeles magazine executive editor Matthew Segal. Asked what he would take away from the story, Leibowitz pointed to the school district’s resistance to change and Deasy’s style of leadership. “What impacted me most is how the LAUSD is a system incapable of being moved, that if anyone tries to change it in any major way, it will budge just enough to crush the would-be change agent and then go back to being inert. And still, knowing the outcome, so many adults decide that, for their students’ sakes, they have to get in the way,” said Leibowitz. “Deasy is arguably the district’s leading change agent, and I admire his commitment and, to a degree, his impossible dreams as well…. I do hope the superintendent will realize how much he and [the teachers and principals] who work under him have in common, even if they fall behind the 100 percent standard of excellence he has set as his own bar.”

RELATED: More Los Angeles magazine PEN Literary Award Winning Articles:
A Shot in the Dark (January 2009) by Mary Melton
The Test of Their Lives ( May 2007) by Jesse Katz